Multinational tech giant Anker has become a reputable brand in recent years in the dash cam arena, known for their reliable power banks and charging tech. This naturally resulted in some buzz when Anker’s Innovations sector announced a new line of dash cams under the Roav brand, which aim to provide great value for money and interesting designs to the masses. Price wise, the C1 Pro falls in between the higher end C2 and the basic C1 model, providing a great balance between affordability and features.

Included in the box is a a two-port charger, some 3M mounting plates, a lengthy micro USB cable and the necessary literature to get started along with the camera itself, which is a single unit device. The inclusion of a 32GB Samsung Evo microSD card is highly commendable at this price point, as most dash cam manufacturers tend to leave the external storage for you to purchase.

The Anker-branded charger plugs into your car’s cigarette lighter, which may prove to be either inconvenient or the complete opposite depending on how you usually use that space. For most drivers, this simple connection method will suffice. The included cigarette adapter has an additional USB plug space that can still be used to charge your phone or other devices while it powers the C1 Pro.

The C1 Pro features a unique wedge design with the display taking up most of the space up front, along with some navigation keys below. The wedge shape is smaller and less visible on the outside of your car, helping prevent theft. On the bottom left side you’ll find a power button, which has an LED in the middle that blinks to let you know the camera is recording. On top of it lies a small speaker which acts as an alert mechanism. 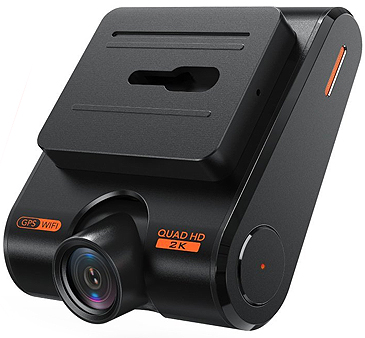 Flip it over and you’ll find the mount along with some branding and the camera sensor itself, which lies at an angle closer to the bottom of the wedge-shaped casing. The entire camera and accessories are adorned in a simple matte black coating, accentuated by the occasional bright orange as per the Roav branding. Overall, the clean and modern build is discrete enough to suit any vehicle interior and blends in well despite its outward appearance.

For those living in more extreme climates, its worth noting that even though this camera uses a battery rather than a capacitor, the camera will work in almost any condition, from 14 degrees Farenheit all the way up to 149 degrees.

The camera fitted to the C1 Pro is capable of recording video in 1440p or 2K at 30fps. If you want a more slow-mo friendly framerate without compromising on quality, you can bump the resolution down to 1080p and double the frames per second. There’s also the lower but still adequate 720p at 30fps option for those looking to record longer trips without transferring recordings.

Wide Dynamic Range takes care of low light conditions and allows for sufficient recordings at night time. Videos aren’t too noisy and higher resolution settings will allow you to capture small details such as number plates and road signs from a distance with ease. The six-glass wide angle lens is sufficient for capturing up to four lanes of traffic in a single frame.

Once you’ve parked and turned the car off, the C1 Pro can be unplugged and will continue to record loop videos for up to five hours by utilizing it’s built-in battery. Most other dash cams can only hold their charge for a few minutes, or just enough time to save a video file. The recording loops can be set to work at either one, three, five or ten minute intervals depending on how much time you’re leaving your vehicle unattended. This is a good option for people wanting to use it in parking mode while they’re at the store shopping, but not for 24/7 power.

For insurance and legitimacy reasons, you also have the option of watermarking your footage. Date and time is automatically stored with each recording as well. The gravity sensor will automatically lock footage recorded in the last 30 seconds if it detects an incident. These features help the C1 Pro do exactly what a dash cam should, which is providing sufficient evidence in case of an accident or theft. 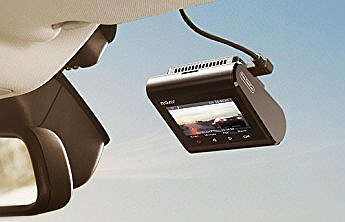 There are numerous other features that make the C1 Pro a considerable option in this segment. The Roav mobile app is downloadable on both Android and iOS devices. It connects to the camera via WiFi and gives you a variety of options. You’ll be able to browse and playback videos right from the app, along with being able to transfer them onto your mobile device, eliminating the need to remove the microSD card.

The Roav app also allows you to customize every setting of the camera. Everything from resolution, watermarks, parking mode settings, SD card formatting to updating the camera’s firmware can be done via the app. Roav has taken the liberty of including a modern overlay that displays your speed and location data over recordings if you choose to enable it, which look rather cool.

The built-in mic does a good job at recording audio and has the option to mute the mic, and the built-in speaker is reasonably audible as well.

The amount of features and quality components Roav has included in the C1 Pro make it a considerable choice as a daily dash cam.