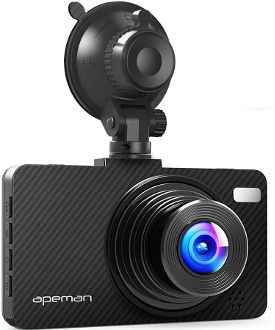 The APEMAN 1080p c450 is one of the more entry level cameras in APEMAN’s lineup. It records up to 1080p FHD with high sensitivity for night driving. It has a 170 degree wide angle and a 650NM lens to capture up to 3 lanes of traffic at once. It has all the basic features of a quality dash camera and even has a basic parking mode, which is unusual for cheaper cameras. The only features this camera does not seem to have is a companion app and additional GPS services, but if you are just looking for a camera you can set up and forget about, this one fits the bill. It is very lightweight, almost feeling like a toy when you pick it up. It is easy to set up and it comes with 2 suction cups for the window and dashboard. It comes with two power cords: one that uses a USB port and one that uses the cigarette lighter for older cars that may not have a USB port. You need a 32 GB SD card which is sold separately, but when used the camera stores up to 300 minutes of footage. The company suggests backing up necessary files and reformatting the card every 2 weeks to prevent crucial files from being deleted. This camera has a screen as well to view footage directly on the device, but it is easier to just view on a computer. If you are looking for a camera with decent video and some additional basic features, the c450 is a very cost effective option. You also get a 1 year warranty and great customer support from APEMAN. 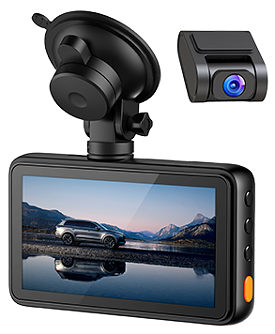 The APEMAN c860 is a dual dash camera that has 1440p max resolution if you’re only using the front camera. If you use both cameras at the same time, the front camera has a max of 1080p resolution and the rear camera has a max of 1080p. There is an option to change the framerate between 30 and 60fps, which alters the camera quality respectively. Both the front and rear cameras have a 170 degree viewing angle. The camera also comes with a 3-inch HD IPS display screen, making it one of the best screens for an APEMAN camera. Unlike other LCD monitors, the IPS monitor has better viewing angles, which is good for a camera that stays in the sun most of the time. It also has great color accuracy and works well for wide viewing angles, which makes it work well for this camera. The Sony IMX335 image sensor in the c860 is slightly better than in cheaper cameras to provide better night time footage in both cameras. Just like any other camera in the APEMAN lineup, you also get an easy setup, a yearlong warranty, and responsive customer support. This camera also does not come with an SD card but it can support up SD cards up to 128 GB. There is also an H.265 compression option for video so it takes up less space. While the c860 does come with a motion detection system, it only has a shock sensor so it will only record on impact rather than when it detects motion. This camera costs a bit more than most of the other APEMAN cameras and although it doesn’t have additional features, the better quality image sensor makes for better footage overall. 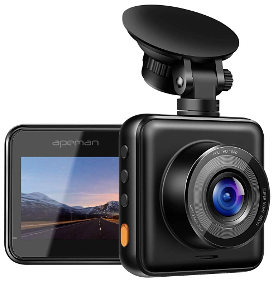 The APEMAN Mini c420 is a smaller model in the APEMAN lineup. There is a dual cam version of this camera, but this review is specifically about the single camera product. Given the name, the camera itself is only 2” x 1.6” big, which makes it very inconspicuous and easy to hide on a windshield. Although it’s small, the camera still comes with a 2 inch LCD screen for easy viewing and still shoots in 1080p FHD at 30 fps with a 170 degree viewing angle. This camera supports SD cards up to 32 GB in size, so be sure to buy one with the camera if you do not already have one. The Sony Starvis image sensor is a bit less powerful than other sensors but still has a large aperture and WDR to ensure image quality. The LCD screen can seem a little small and there are a lot of icons on the screen when viewing footage, but it works in a pinch. It’s always a good idea to look at the footage on a larger screen to check for info and image quality. The suction cup mount works well and is highly adjustable so you can move it around to get the best angle. However, the camera is so tiny that it sometimes feels too lightweight and cheap. The mount is strong and supports the camera well, but it definitely doesn’t look resilient. The size and quality of this camera could be a good or bad thing depending on your preferences. Either way, APEMAN’s customer support is known to be very receptive and will help with any problems or necessary replacements. 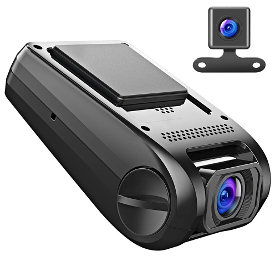 The c550A is a dual dash camera with an LCD display built into the front camera. The front camera records in 1080p FHD and the rear camera records at 720p. Both cameras record at 30 fps and the front records at a 170 degree viewing angle while the back camera records at a 130 degree angle. This camera has a few additional features that aren’t often found on other APEMAN models. The c550A comes with a 32 GB SD card as of December 3, but that size can only hold a few hours of footage, especially when recording at full HD. The camera supports SD cards up to 128 GB so you might want to upgrade if you plan on recording a lot. It features a GPS antenna sold separately that can record speed and location data in addition to just video footage. Although this camera isn’t as flexible as other smaller cameras, it can still move a fair bit to shoot footage from different angles. The rear camera has some water resistance features in order to still be able to shoot on a rainy day. Since the camera and the LCD screen are all on the same physical device, the camera overall feels more durable. It can also fit into smaller places than a camera with a separate screen to make it less visible. This camera also comes with a sticker mount instead of a suction cup mount to save space, making it easy to place it behind the mirror. Before sticking this camera to your windshield, test it out to avoid glare – some angles make excessive sun a problem when reading a license plate.

The c580 is basically an upgraded version of the c550 without the rear camera. The camera and the LCD screen are on the same device, which makes this camera easier to mount in tiny, discreet places. This also means that the camera’s buttons are actually on the case itself and are quite large to make the menu easy to navigate. It also works better than suction cup mounts in hotter climates due to a lesser risk of melting. Because it is so lightweight, the camera has a very low risk of falling off. The c580 records in HD resolutions as high as 1920 x 1080p at 30fps and has a 170 degree viewing angle. This is one of the only APEMAN cameras to have a built-in WiFi connection and a companion app called Finalcam where you can view, download, and share video files using your phone. While the image quality is nice and the image sensor and WDR help with clarity, the c580 only supports a 32 GB SD card and it does not come with the camera, so make sure to back up important files and format the SD card regularly. In addition, be careful of glare and double check the angle of the camera before placing it as the sticky mount that comes with the camera is quite adhesive and cannot remove from the windshield easily if you make a mistake. Just like all other APEMAN cameras, the setup is easy, the instructions are easy to follow, and customer support is extremely helpful. The camera performs its core functions very well and doesn’t rely on bells and whistles to make a good product.

What size memory card can I use in an APEMAN dash cam?

Most APEMAN dash cams allow up to a 32GB microSD card, which should be Class 10

How many hours of video can I record?

This can vary based on settings, but with the max memory card you should expect to get around 4 hours. With a dash cam, you don’t need to worry about filling up your memory card because it loop records, meaning it records over the oldest file and starts over.

How long does the battery last?

Like with nearly all dash cameras, the battery is not meant to power the camera, it is only meant to quickly save the last video file when you turn your car off. The APEMAN dash cams should always have a power source.

How to setup your APEMAN dash cam