A wireless backup assist camera system has many benefits over a traditional backup camera that is fully wired into your car or truck. For those who want an after market backup cam, The AUTO-VOX Solar Backup Cam could be a good option. Having its rear backup camera wirelessly transmit a video signal up to the included front screen monitor means that you don’t have to worry about stuffing wires into the trim paneling of your car to trying to hide them. This also make the installation far easier and faster than a wired in backup camera setup. People also choose a wireless backup camera for trailers, where having a wire would be lengthy and difficult to connect all the way to the front and inside of your car. 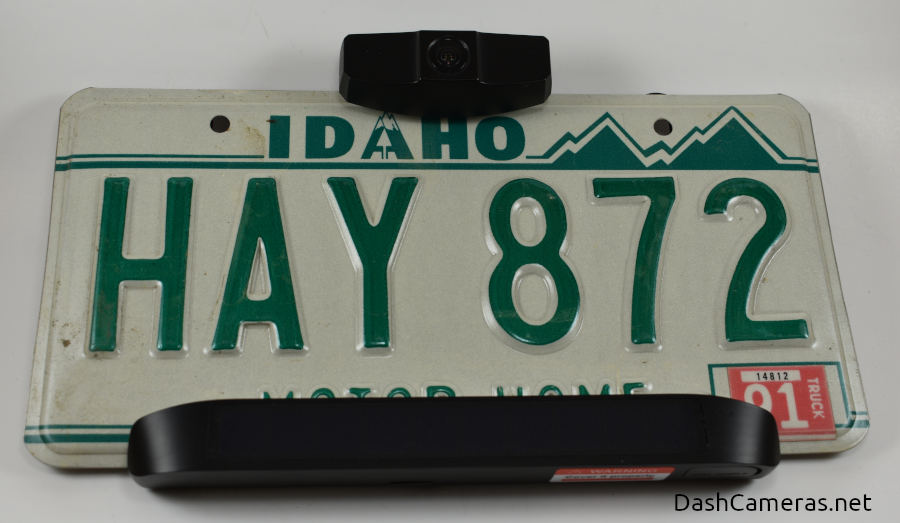 What this camera lacks in technical prowess it makes up for in other areas. Even though this camera doesn’t have the sharpest graphics or audio, the innovative features like solar charging, easy installation, and wireless setup are great advantages. It’s a great camera for someone who wants an easy setup and the option to just forget it’s even there, especially if you use it often enough for the battery to consistently charge.

This camera feeds video back at a max of 480p at 30 FPS. It has a 110-degree viewing angle, which is a little small but it covers all three lanes in front of or behind your car, depending on where you choose to place the camera with no fish-eye or vignetting effect. It has a 5-inch monitor with a digital wireless signal so you can watch what the camera in real-time without any wires. It’s a pretty simple monitor and only uses 2.4GHz WiFi so it doesn’t interfere with other WiFi, bluetooth, or radio signals.

The monitor itself is extremely simple – it only really has a few buttons on it, so it’s hard to get confused or lost in the interface. It comes with suction cups to attach the monitor to the dashboard to view what the camera is seeing. Another thing you could do depending on your preference is attach it to your rearview mirror so you can have a real-time backup camera with parking assist. It only has three settings for how long the monitor will stay on for before going on sleep mode: 30 seconds, 60 seconds, or 90 seconds. The short intervals mean it might not be super helpful as a permanent replacement for your rearview mirror as you have to keep turning the monitor on every so often. The monitor also has an additional USB port so you can charge your phone or other devices if their chargers also use the cigarette lighter. It’s all controlled through the buttons on the monitor itself. That’s pretty much all there is to it – no smartphone app you have to worry about, no bluetooth pairing, no hardwire kit, just the backup camera and monitor. It’s an incredibly simple setup.

On the main mounting bracket for the rear camera, there is a solar charging strip located on the bottom of where your license plate is mounted.

The camera comes with a solar rechargeable 3350mAh battery, which according to the manufacturer only needs to be charged once per year as long as the battery gets at least thirty minutes of sun exposure per day. If the climate where you will be using the camera gets to below 0 degrees Celsius or 32 degrees Farenheit then the battery might hold less of a charge so you may need to charge it manually using the USB cable provided. This might also be the case if you live in a rainy climate. You can also manually charge it if you’re not using your car for prolonged periods of time or have to park in a shady, non-lit place by using the bottom USB plugin.

One of the best features of this product is the easy installation. This is a truly wireless dash camera that really does take 5 minutes to install with the only tool you need being a screwdriver. The camera and solar battery are on the same piece, so all that needs to be done is detach the license plate and slide the piece with the camera and solar battery in. There’s a little bit of wiggle room in case you have to adjust the camera angle depending on the shape of your car. The monitor needs to be plugged into the cigarette lighter in the front of the car. It’s also easy to uninstall and detach the camera if you use multiple cars and don’t want to buy multiple cameras. This can also be hardwired into your fuse box by using a dash cam hardwire kit that typically sell for around $20 or less on Amazon.

Something that’s really important to note is that the license plate must be under 7 inches or 17.78 cm in height in order to install the camera and the distance between the upper screws needs to be between 6.57 inches (16.7cm) to 7.36 inches (18.7 cm) long. Fortunately there’s a fairly short list of cars that don’t meet these specifications. Some common cars that can’t attach this camera to backup view are:

Other than these restrictions, the camera fits on a lot of different types of cars and can even be used on a spare tire as long as you have the license plate mount. The max distance between the front and the back of the car is 50 feet (15.2 meters), so if you’re using a larger car like a semi truck or an RV, it’s still possible to use a wireless camera, but the signal might not be great due to the length the signal has to travel from the camera to the monitor. There are additional antennas you can purchase to amplify the signal so you can still use the camera on a larger vehicle, however most regular-sized cars, trucks, and SUVs will have no issues.

The monitor isn’t just used as a way to view what the camera is seeing, it also helps you park! There are six different types of lines you can use to help you park and these can be switched with a button on the monitor. There used to be a remote included to control the monitor but on the new version the buttons on the monitor provide all the controls you need.

The visuals aren’t as sophisticated as higher-end cameras. While the manufacturer advertises the monitor as HD, the camera itself doesn’t stream the video feed back in HD. This doesn’t necessarily mean the visuals look bad, it’s just not as crisp as other more expensive backup cameras. Due to the camera’s placement on the car, night vision is great because the rear headlights give the camera a lot of extra light to work with. There are also image brightness settings you can change on the camera if you need a little more light to work with.

Even if you can’t get the solar charge to work due to rain or snow, this camera is extremely resistant to adverse climate conditions. The camera itself is IP 68 waterproof standard, so it can withstand a harsher climate, which is unusual for its small size. The camera can function in as low as -13 F (-25 C) and as high as 140 F (60 C), so again, it’s super resilient for such a small device.

What Does It Come With? 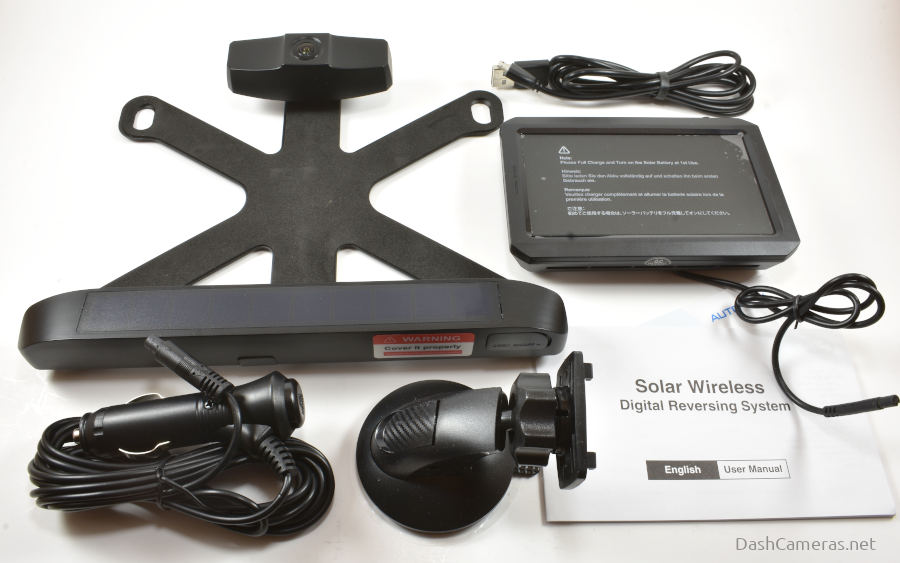 NOTE: The newer version of the AUTO-VOX Wireless Solar Back Up Camera does not come with a remote, instead the button to activate the backup cam is built into the end of the cigarette power adapter.

This camera is great for someone who wants a hassle-free experience. It takes almost no effort or experience to install and provides decent visuals, especially in low lighting conditions. The lack of wires is also a major plus. It’s not for people who want the highest video quality or coolest new features, but it’s great for people who want a simple camera they can install without feeling overwhelmed and is at a relatively low price point.