The Blueskysea B1W camera is a miniature camera that has a 360° rotating camera lens with a 150° lens angle and built-in WiFi. It also has a parking monitor, but this requires a hardwire kit that is currently sold separately from the camera. The user will have to purchase a micro SD (class 10) card to store video footage as well. This camera also features loop recording and a G-sensor, both of which are typical in your standard dash camera. It’s advertised as a mini camera and it seems to fit this description at 3.5 inches by a bit over 1 inch.

There are several benefits to this camera and one of the biggest is its size. The lack of an LCD screen allows for this camera to fit discreetly in your car and doesn’t draw attention which could encourage theft. Although some prefer a LCD screen for easy access, the video transmission is also clear through your smartphone or tablet with the wifi connectivity. This camera is also extremely user-friendly. Saving a video is done with the push of a button and the rest of the functions are located on an additional mobile app. The mobile app has a pretty simple interface and is easy to use. Another nice feature is the built in WiFi connection to transfer videos from the camera to another device. This feature isn’t often offered on cheaper dash cameras so it’s nice to see it available at such a low price.

One last feature that is especially helpful to those living in warmer climates is the capacitor battery. Instead of using a lithium ion battery that is not heat tolerant, the capacitor helps this camera perform well in extreme climates. Customer service through Blueskysea is also very responsive and helpful with . Any individual issues are resolved promptly and firmware updates are released regularly, unlike other no name dash cams shipped from China.

When purchasing a camera at this price point, there are bound to be some drawbacks and features where the camera could be improved. One of the main areas of improvement would be the audio quality. Drivers that don’t use audio won’t mind this drawback but those that do have noticed a poorer quality than more expensive cameras. Some drivers prefer to have audio to record post-accident events and interactions with law enforcement, and this camera’s audio quality might not pick up these events. The video quality is also not the best but it will suffice for most situations. The lack of an LCD screen could be a drawback for some drivers that want to look at a live recording. There are also several user complaints about the built-in WiFi connection. Sometimes it works well but other times it gets disconnected easily and is difficult to reconnect.

Any time the camera’s G sensors sense a collision or if the end button is pushed on the camera, the current video being recorded gets placed in an ‘Emergency Videos’ folder. That footage does not automatically get overwritten like any other footage does. This feature is to make sure that the footage of a collision is saved, which is one of the most important features of a dash camera. While this is a nice feature, there is no way to delete video footage via the app without erasing all the footage from the SD card. This can be slightly annoying and a way to delete singular videos in the app would be very much appreciated. 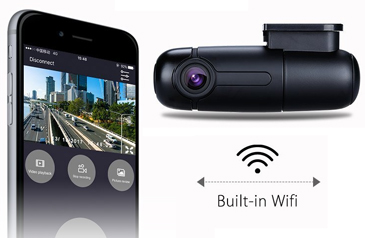 Overall, you get what you pay for. While the Blueskysea B1W is not the worst camera on the market, it’s certainly not the best. Audio and video quality is decent and there are a few additional features that make this camera stand out like a parking monitor, a built-in WiFi connection, and a mobile application. While these features are regularly seen in more expensive cameras, this is a cheaper and smaller camera providing the same features at a lower price. Naturally this means that the features don’t perform as well as they do one more expensive cameras, but the fact that the features themselves are starting to appear on cheaper cameras probably means that they are becoming cheaper to include and will probably improve in the coming years.

The appeal of this camera also depends on preference. The compact size will appeal to many drivers so that it can discreetly fit in almost any vehicle. The flexibility and 360° swivel design allows the camera to be placed virtually anywhere. If drivers are willing to sacrifice audio and video quality as well as a few premium features, the Blueskysea B1W is a great camera for the money. Users that are more interested in video quality and sound, consistent performance might want to look into more expensive models.

The A119 from Viofo is a popular budget priced dash cam which sells for a little under $100. How does the B1W compare to the A119? Firstly, the B1W is priced a bit lower than the A119 and secondly it does not have a built-in LCD screen like the A119, which can be a good or bad thing depending on what you’re looking for in a cam. Overall the A119 is going to have better image quality for both day and night driving, but a higher price tag. 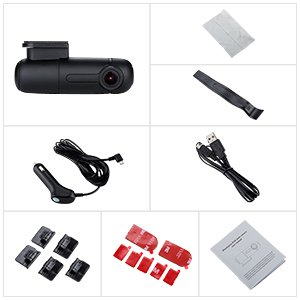