A cars dash camera system has many things in common with a traditional video camera like a GoPro, where video specs matter. But, you will probably only use the dash cam video footage once, in the time of an accident or major event, so it’s important that the video quality is there. Your dash cam video might help you in an insurance claim or with a police report. 4K video resolution will help get you a clearer picture, helping capture the license plates of cars around you, which could be needed in a hit and run accident captured in parking mode.

Why 4K Video is Important

While most people will not be using their dash cam to record and put together movies that they can share on Youtube and social media, they will usually only be using the video footage one time in the event of a car accident. Even though you might only need the video footage once, having high quality and detailed video is important. 4K video, which is 3840 x 2160P resolution provides far more detail than 1080p video.

Why the detail matters: if you do find yourself involved in an incident on the road, capturing the other cars license plate may be an important part of your video documentation. 4K video records higher resolution, increasing your chances of getting footage that clearly shows the license plate numbers. This can be critical evidence if you plan on using the video for an insurance.

Here are the 4 main features to consider when buying a real 4K dash cam:

There are currently hundreds of “fake” 4K dash cameras listed for sale on Amazon and eBay. In order for a dash camera to record real 4K video (3840x2160p), they need to have at least an 8MP image sensor. Most of them only have 2MP or 4MP image sensors. They claim to be 4K because the video is resized into what appears to be a 4K video file, although it was not actually recorded at 3840 x 2160p.

How did we curate this list? We have personally tested many of the dash cameras on this list and have verified that they all record in real 4K. Our website has been online for more than 8 years, doing hands-on testing of over 100 dash cams. We’re not an Everything Tech type of website, we only specialize in dash cameras. Not only have we personally tested many dash cams, we’re also actively part of online dash cam communities and have read through the feedback of thousands of buyers over the years.

The LifeChaser 4K is a dual dash cam setup that records 4K video on the front camera and the rear camera shoots 1080p. The front camera has a wide lens angle of 170 degrees, which is wider than most dash cams, giving you more video coverage in front of your car. 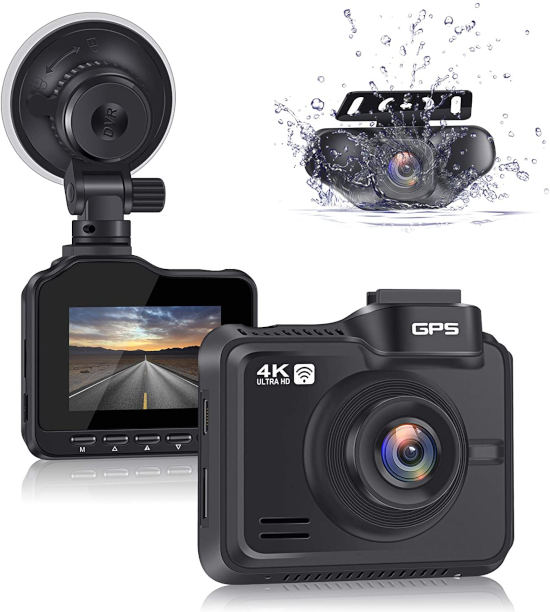 As with all the dash cams on this list, the LifeChaser records video in real 4K using its OmniVision OS08A10 image sensor. This image sensor is know for capturing clear night time video footage.

The LifeChaser dash cam has GPS that’s built into the camera, so you won’t need to buy a separate GPS module. The GPS feature can display your speed and coordinates on the video, along with built-in WiFi to connect to the dash cam with your smartphone or tablet.

With its built in Wifi you are able to remotely connect to the dash cam with your Android or iPhone using their APP. You can remotely download videos and make dash cam setting changes. If you don’t want use your phone you can use the 2.4″ IPS screen on the back to access the menu and settings.

Basic parking mode features are included in the LifeChaser dash cam. The 2 main functions are motion detection, which will automatically record if movement is detected in font of the lens while you’re parked, and impact detection which records video if your car is involved in an accident, like a hit and run.

The included rear camera is not full 4K like the front. It records video in 1080p HD. 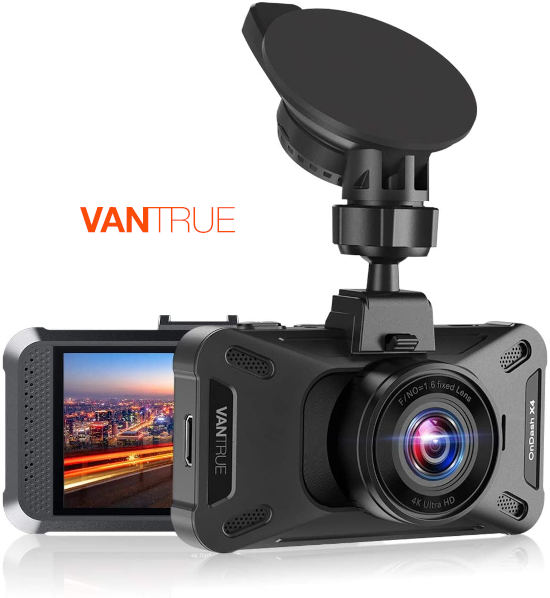 Using the 8MP IMX317 image sensor from Sony, ensures a crisp video quality over the other generic and off brand image sensors used in other dash cams. Because it uses a 8MP image sensor, you know it records real 4K video and the X4 supports up to a 256gb microSD memory card (Vantrue recommends the Samsung Pro Endurance card), giving you more than 12 hours of video storage. When the memory card fills up it will loop back and record over the oldest video files automatically.

The X4 has a built-in parking mode feature which can protect your car when parked, offering motion and impact detection, which records when either is recorded. This feature requires a hardwire kit that plugs into your cars fuse box, which is sold separately.

A hang down type suction cup mount is used on the X4. While some might like this mounting style, others will find it can be more visible than a wedge shaped type mount.

You are able to have a GPS feature with this dash cam, although you need to purchase a separate GPS module that plugs into the camera. If having a GPS is a priority for you, we would not recommend getting a dash cam that doesn’t have it built-in.

The Stealth dash cam from ROVE is a 4K camera
that uses a more traditional hang down type mount, coming with a suction cup, although you can purchase an aftermarket adhesive mount if you’re concerned about it falling off. 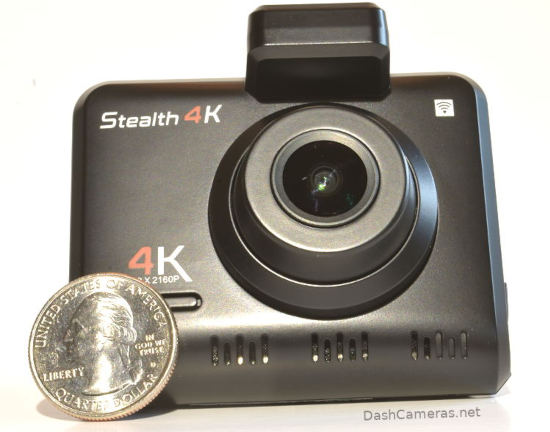 The GPS feature can be used to display your speed and coordinates directly on to the saved video file or viewed live on the screen as you drive. This feature can easily be disabled if you don’t want to have this info saved.

The Stealth 4K uses ROVE’s dash cam app to connect to your Android or Apple iOS smartphone, giving you the ability to download dash cam videos or photos directly onto your phone or tablet via the built-in WiFi. If you don’t want to use the app or your smartphone to view videos or change camera settings, you can use the 2.35″ IPS display on the back of the camera.

Recording in true 4K (3840x2160P) it uses an OmniVision image sensor, which is consider one of the top sensors used in dash cams. It records crisp and clear video both day and night.

The A129 Pro Duo from VIOFO is a small all black wedged shaped dual dash cam setup. Over the last few years the VIOFO brand has become popular for its good video quality at a cheap price point. 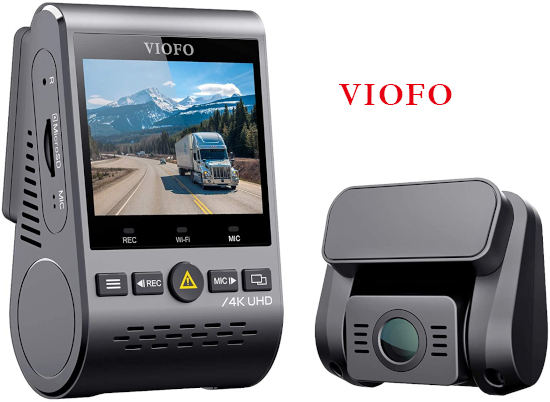 Its Parking Mode uses an advanced buffered parking mode that will capture 15 seconds of video before an event happens, like an impact, and continues to record 30 seconds after the event and then saves and locks the video file. To fully utilize it’s parking mode features you will need a hard wire kit to tap into your cars battery, or use an external battery pack.

Its WiFi will allow you to connect your smartphone or tablet directly to the dash cam and view and download video files. However, if you don’t want to connect your phone you can view videos directly on its 2 inch LCD screen.

Most A129 Duo Pro’s are sold with a mount that has a built-in GPS module that can watermark your video with your location and speed along with displaying your real time speed on to the dash cams screen. This can all be disabled if you don’t want this shown in your video files.

The Duo offers crisp video and uses the desirable SONY image sensor which is considered the best image sensor brand for dash cams.

The A129 Pro Duo offers two different options for its rear camera. You can either go with the common rear camera that is meant to be mounted on your back window and recording outside, or an interior infrared camera that mounts facing inwards and records the interior of your car, often used by Uber, Lyft or taxi drivers.

The U1000 from THINKWARE is a discrete, all black wedge shaped dash camera. It records in 4K video and has a variety of high end parking mode options. There is the option for a 2nd rear camera, making this a dual dash cam setup. 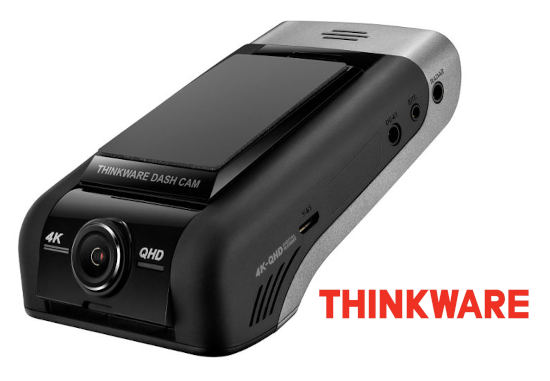 The U1000 shoots in full 4K video and uses Sony Exmor R STARVIS image sensor which is an 8MP sensor, meaning it captures real 4K video. If you lower the image quality to 2K you can go from 30 frames per second to 60 frames per second.

With the THINKWARE CLOUD, using your Android or iOS smartphone or tablet you are able to remotely check on your cars location, get automatic notification when your car leaves a certain GEO boundary or if the g-sensor detects a sudden impact from a crash.

An optional rear dash cam can be plugged into the main U1000 unit, giving you a dual dash cam setup that shares one memory card. The rear camera can record at (2560x1440p @ 30fps) while the front camera records in full 4K.

Blackvue is known in the dash cam community as the top of the line brand of car cameras. When people ask online about what the “best dash cam” is, people will often point them towards a Blackvue dash cam. 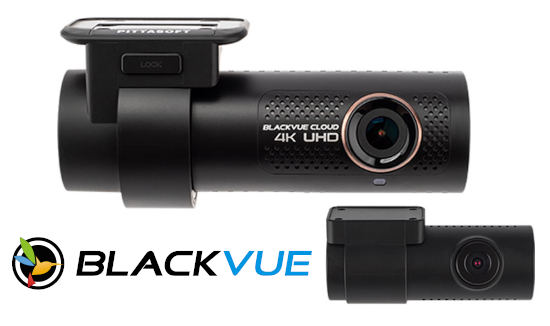 With its remote connectivity you’re able to sync your phone directly to the dash cam, download videos and get notifications of a major event

Blackvue is one of the tope choices for a discrete dash cam install with its small tubular shape, keeping it hidden from potential thieves

While some dash cams use a separate GPS module, the DR900S has GPS built right into the camera. GPS will allow you to track your route and log your current speed.

The parking mode feature will keep the dash cam in standby, waiting for an impact to be detected or the motion of someone walking up to your car. This will trigger the camera to begin recording and capture an event while you are away from your car.

For an added fee, there is the Blackvue Cloud service, which offers remote viewing of video and push notifications to your phone in the event of a crash. You may also remotely backup important video files to the cloud.