One of the most important features of a dash cam for buyers is if it can connect to their phone. Many mid to high-end car cameras will have built-in wifi that can be used with an app to have a wireless connection from your Android or iOS phone to the dash cam. There are some dash cams that use Bluetooth for various functions, like sending alerts to your smartphone, but the primary way for a dash cam to connect and stream directly to your phone is through a wifi connection. Below we will go over all the important features to look for and the best rated wifi dash cams.

Here is our review of the best wifi dash cameras on the market today, for both single and dual channel wifi enabled dash cams. 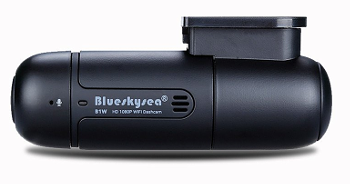 The Blueskysea B1W camera is advertised as a mini camera and is definitely smaller than most other cameras on the market. It has a 360° front and rear camera, which means that you can turn the body of the camera fully to provide a full view. The lens is 150° and naturally has built-in WiFi with a complimentary phone app. It also has a parking monitor, but this requires a hardwire kit that is currently sold separately from the camera. It has all the features of a regular dash camera like loop recording and a G sensor for a low price.

Overall, you get what you pay for. This camera is under $100 and its and while it’s not the worst camera on the market, it’s certainly not the best. Audio and video quality is decent as well as the WiFi connection and phone app, but there are better options out there. The app has mixed reviews but seems to have improved in recent months. For such a cheap camera it is surprising that the app and WiFi work so well. It’s a great option for Uber or Lyft drivers who want a sturdy device that they don’t have to fiddle with. It also allows you to record passengers due to the camera rotation. If you want a cheap camera that has a WiFi connection and decent audio and video quality that’s easy to install and forget about then the B1W is a solid option. 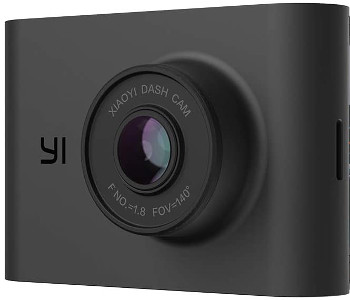 YI Nightscape Dash Cam provides 1080p visuals at 30 fps with a 140° wide-angle lens. The f/2.0 large aperture allows for good night vision as well as good daytime image quality. Like this list suggests, this camera also has a WiFi connection and app, which is surprising when you consider the price. Additionally, this camera has a 2.4” screen display on the camera to watch video playback immediately. It has a cooling design to keep the camera working in hot temperatures and climates and makes the camera last longer.

Customers are very happy with this camera. The video quality is worth the money and exceeds expectations and it is very easy to setup and control using the user interface. It is important to note that license plate numbers are a bit hard to read with this camera but it still has pretty decent image quality, especially for the price. The WiFi and app are also well worth the price but are a bit slow, especially when transferring videos from the dash camera to the phone. This is one of the cheapest cameras on the market today and it holds up surprisingly well. It is a set up and forget type of camera that allows for minimal interaction with the camera if desired. There’s no new ground covered but it’s a cheap option that meets basic needs and provides peace of mind. 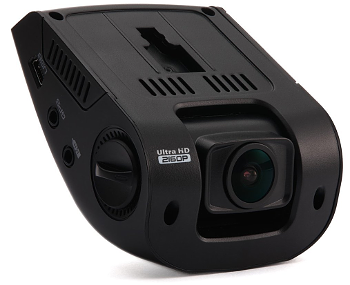 The Rexing V1-4K Ultra can record up to 4K video at 24 fps. That’s the highest resolution option but it also has an option for 30 or even 60fps at full HD, or 1080p. It has a 170° angle lens and WDR to further improve the visuals. The camera also has a WiFi connection to transfer videos to your phone and share them.

The Rexing V1 series seems to be a dash cam line that has greatly improved over time. The third+ generation has improved video quality over the previous generations. The menus and operation of them are smooth and straightforward and the WiFi connection works well. You can use your phone to turn recording on or off.

With the WiFi features, you can directly connect your iPhone, Samsung or tablet directly to the dash cam, which will give you the ability to get a live view of the camera, download videos, and change settings on the V1 dash cam.

The V1 uses a capacitor rather than a battery, so it will do better in high heat or extremely cold temperatures. It’s also more reliable, as you don’t have to worry about a battery going bad over time.

There is also a basic parking mode feature on the V1 that will allow you to set the camera to detect and impacts when you’re away. If it does detect a major impact, it will begin recording for 20 seconds and then go back into a standby mode. To use this parking mode feature you will want to have a hardwire kit that goes into your cars fuse box, or an external battery. 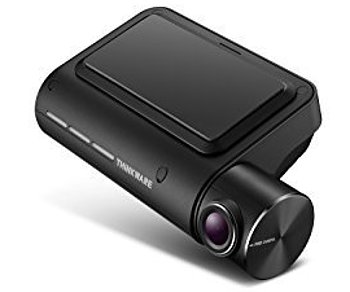 The Thinkware F800 PRO can record 1080p video at 30 fps on both front and rear cameras and has built-in WiFi, GPS, and a parking mode. Unlike other cameras on the market, this camera doesn’t have 4K video or a 60fps option. Something that makes the Thinkware F800 unique is a cloud feature, but many believe that it works a bit differently than advertised. Instead of a cloud like Google Drive where documents and videos can be stored to use on multiple devices, in this context the cloud function refers to connecting a smartphone to the device for remote alerts and live video viewing over the Internet.

While this camera has excellent image quality and a great parking guard, it seems expensive for what you get. Coming in at over $400, it is one of the more expensive dash cameras on the market. There are some new features to this camera for sure but for some people it will not be worth the money. Those that are only interested in image and audio quality can find better capturing software in less expensive cameras. The WiFi connection is there but can be unreliable and is probably also of a lower quality than some cheaper cameras. The app can be clunky and is a bit worse than software from other dash camera companies. This camera will probably last for a long time but with subpar features for an exorbitant price. Technology has made a great leap forward in the past few years so you can still get a quality camera for less money that might perform better than the Thinkware F800. 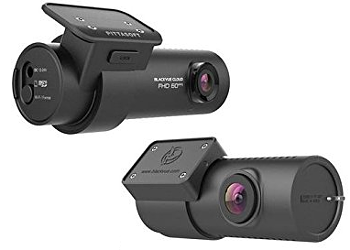 The BlackVue DR750S-2CH is a dual dash camera. The front and rear cameras feature Full HD 1080p and uses Sony STARVIS image sensors for a sharper quality image. The front camera can record at up to 60 fps while the rear camera has a maximum of 30 fps. Some additional features include a GPS logger, Wi-Fi, cloud connectivity, and impact and motion detection. There are some intuitive controls on the BlackVue that provide a more convenient way to change the settings. You can toggle the audio recording on and off by simply waving your hand in front of the proximity sensor and configure WiFi settings with the push of a button. Speed data can be overlaid onto the footage and and BlackVue has a map to find the location of the vehicle during video playback.

The cloud feature in the BlackVue is a bit better than in other cameras. With the BlackVue you can use remote live view, send push notifications to your phone, backup videos to the free cloud storage, and play and download videos from the camera’s memory or the cloud from anywhere. You can even use two-way voice communication with the driver from the app through the camera’s integrated speaker and mic.

BlackVue is a brand known for high quality products, and the DR75OS-2CH is no exception. This camera delivers a great experience with new features that help it differentiate itself from both cheaper and pricier cameras. While some may not be able to justify the almost $400 price tag, those that are interested in a higher tier dash camera will be satisfied.