With an increase in affordability and awareness of the benefits of owning one, dash cams are more popular than ever. But not all are created equal. While there are numerous budget cams available, BlackVue is taking a different approach with the DR750S-2CH and providing a full-fledged dual dash camera with a variety of additional tech and features.

Open the box and you’re greeted with a variety of accessories and extras. This includes eight cable clips, double sided tape for the mounting brackets, a pry tool, cables, some literature and the two cameras. A microSD card and reader is also included, which is rare at any price point when it comes to dash cams.

An optional Tamper-Proof case can also be included, which blocks physical access to the microSD card slot, as well as preventing the ability to unplug any of the cables. This could come in handy if you’ve just recorded something that you don’t want to lose and are in danger of having your camera taken from you.

The build is relatively simple, with both the front and rear cameras encased in cylindrical shells attached to mounts. The polycarbonate build feels sturdy enough to withstand a drop or two and the matte black coating is a clever choice, making the camera virtually invisible in low light.

The front camera is the larger of the two and holds all the hardware that makes everything tick. On the back you’ll find a strip with LED indicators that turn on when GPS or recording is enabled, as well as a speaker. Flip it over and you’ll find the camera lens and lock button for the mounting bracket. The left side holds the power port, activation button and SD card slot while the right side has a proximity sensor and an LED indicator for WiFi.

Overall, the DR750S-2CH maintains a clean and simple design, with the only downside being that you’ll need connect the camera to another device to set it up and adjust your preferences. Luckily this is made a lot easier with the BlackVue app, which is available on mobile and desktop operating systems.

As long as you have a WiFi connection, you can use the app to configure settings and browse through your recordings, as well as being able to view live recordings, which makes it easier to adjust and position the camera. Unlike most dash cam apps, BlackVue’s is quite clean and user friendly. 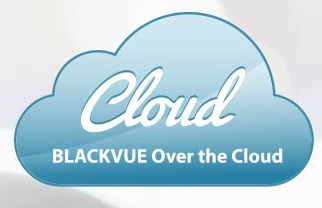 BlackVue has also included their own cloud service for this camera, dubbed BlackVue Over the Cloud. This lets you view what the camera is recording live from your phone, as well as facilitating push notifications. Free cloud storage is also included incase you run out of SD card space or need to quickly transfer recordings across devices. Another impressive feature made possible by the cloud technology is two-way voice communication between the camera and your mobile device through the app thanks to the integrated speaker and mic. This could work as an alternative for phone calls between the driver and someone at home.

A unique feature of the DR750S-2CH is the proximity sensor, which also acts as a control panel of sorts. With it you can toggle audio recording on and off by waving your hand, which makes more sense than a button if you’re driving, especially considering it’s placement. The WiFi button also takes things a step further and can carry out numerous functions that are first confirmed by a voice prompt before being executed.

The cameras are essentially identical on paper, eliminating the need to decide where each one faces. Both are equipped with Sony STARVIS image sensors, which are built to excel in low light conditions. There’s also an Enhanced Night Vision mode, which boosts the ISO sensitivity of the sensor without over-exposing highlights in bright surroundings. Sony’s alternative to the more conventional CMOS sensor definitely excels in the low light department.

The front camera is capable of recording 1080p video at 60fps while the back unit maintains the same resolution but at half the framerate. Images are clear and vivid, with the right amount of saturation. Noisier images don’t suffer from any sort of fragmentation or frame drops and the camera tends to handle bumps rather well, too. Overall, videos are smooth and the audio is handled rather well with the built in mic.

The only downside to having such high quality video is storage space. And while there is a 16GB microSD included along with some cloud storage, more serious drivers who want to archive more video footage would benefit from an upgraded SD card. Luckily the DR750S-2CH supports up to 128GB of storage. If you only want the video footage for an accident or incident on the road, 16GB will be enough, as the camera loop records and will have plenty of space for the length of an accident out on the road.

There is also an optimized file management system that will automatically overwrite old files, while keeping the latest fifty if you choose to enable that setting. It will also prevent “Event” files that are triggered manually or automatically by impacts from being overwritten, as those will likely be the most important files. The option to customize the quality of your recordings is also present, making it easier to work with smaller storage space.

A unique feature of the BlackVue DR750S-2CH is the Intelligent Parking Mode Monitoring, which, while being a mouthful, is a rather impressive feature. This will have the camera automatically record everything that happens once you’ve parked your car and left.

However it won’t eat storage space as it doesn’t write to the memory card until it detects motion or an impact, at which time it will record what happens, as well as the few seconds before the event thanks to the video buffer. All the LED indicators also automatically turn off once you’ve parked your vehicle to prevent the camera from being visible.

A schedule reboot system is also included, which will automatically reboot the camera provided it is not recording or writing anything to storage, which saves you the fuss of having to do any maintenance yourself. 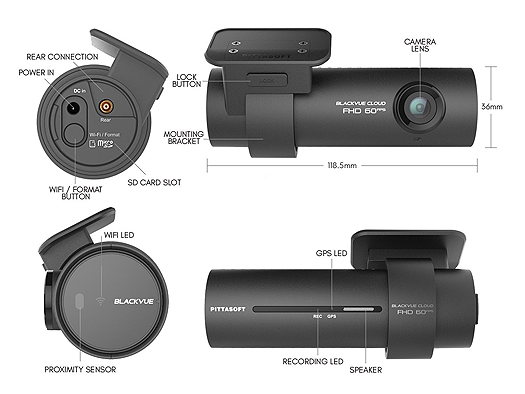 All the additional tech and features give the DR750S-2CH a lot of value while maintaining the core functions of a dash cam, making it a serious contender at its price point. Although the BlackVue dash cameras are priced on the high end, they are considered by many to be the industry leader for high quality dual dash cams. 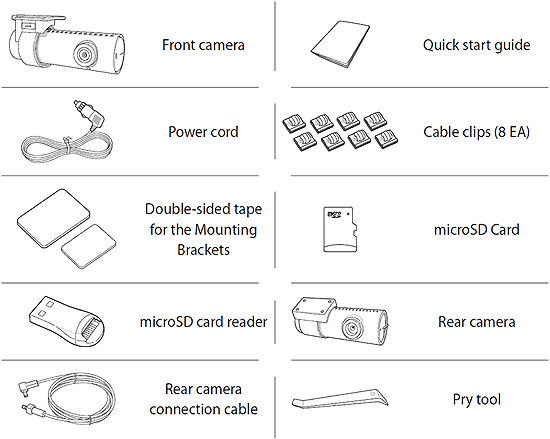 Daytime video footage from both front and rear cameras