The new BlackVue DR900X dash cam is a high end car cam system that is an upgraded version of the popular DR900S dash cam, the “S” series, which will now go by the “X” series of Blackvue dash cameras. It will have all the same features as the previous models, as well as some new features we list below.

BlackVue has been producing dash cameras longer than most companies out there and are often cited as being the best in the industry. Although their dash cams are priced higher than most car cameras on the market, many feel it’s worth paying more for a reliable brand and all the added features their dash cams offer. Their dash cams are known for their sophisticated parking mode features, which include impact and motion detection and can be paired with their Cloud service, which offers remote access and video storage. None of their dash cams come with a screen like you might find on other dash cameras, so you will need to have the BlackVue app installed on your phone and connect to it via wifi in order to use their dash cams. Most of their dash cams are sold as a dual dash cam setup with a rear camera, giving you nearly full video coverage around your car. Below our review of the DR900X goes over all the main features and specs to give you a better idea about the capabioites of the BlackVue DR900X dash cam. 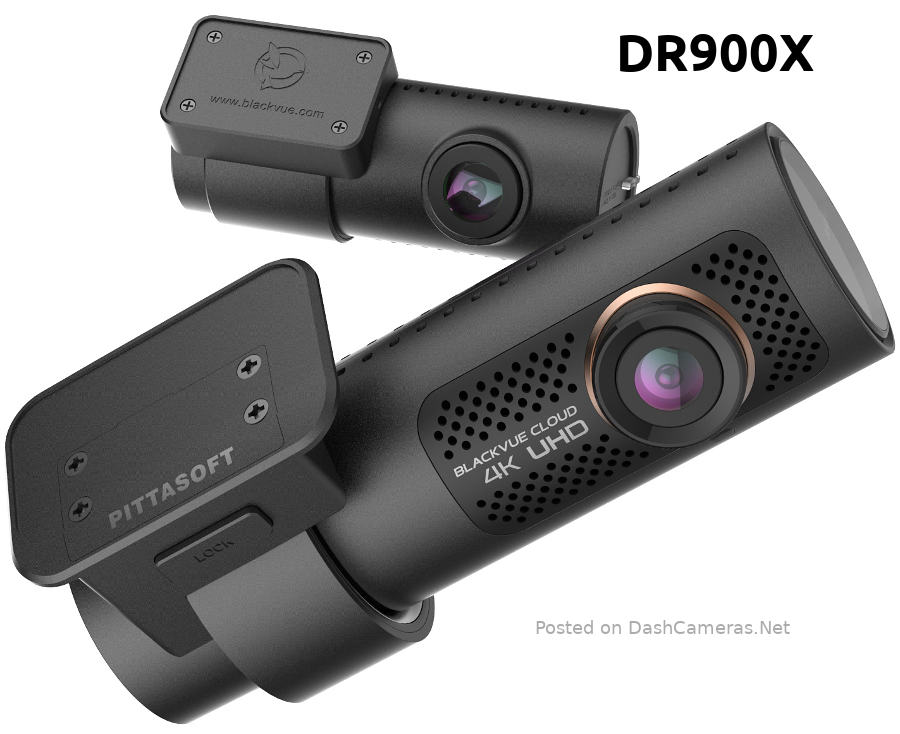 The DR900X offers 2 main ways to store videos. The first is the most common among dash cams, which is using a microSD card. With the dual camera setup, both cameras will share one main memory card. 256GB is the largest microSD card you can use. Using a 256GB memory card you will be able to record about 21 hours of video, while a 16GB card can record about a 1 hour and 20 minutes of video footage. Video files are broken up into small 3 to 5 minute clips, rather than saving one large video. This is so dash cam can overwrite the oldest video files and “loop” back around when the memory card gets full.

The 2nd way video files can be saved on the DR900X is through the BlackVue Cloud service. We have written more about this below.

The DR900X is compatible with the BlackVue Cloud service. In order to use the 4G service, you will need to get a SIM card with a data plan through your phone carrier.

Some of the main features of the BlackVue Cloud service:

BlackVue has been know for their parking mode features for some time now. Their line of dash cams are considered best by many in online communities.

The DR900X has a built in voltage meter that will monitor your cars battery levels and turn the camera completely off if it detects it dropping below a certain level. This will ensure that you don’t completely drain your car battery.

A hardwiring kit is included with the dash cam. This is a set of wires that plug into your cars fuse box. No actual altering of your cars wiring is required. Once you have installed the wires, the dash cam will automatically power on when you start your car. The dash cam will also have power when your car is off that can be used for the parking mode feature.

BlackVue also has a few different external battery packs that they sell. These can be used rather than your car battery, as some don’t want to repeatedly put strain on their car battery. The battery pack is wired into the fuse box of your car and automatically recharges when you are running your car.

Some of the main features of parking mode are:

What’s the difference between the DR900S and DR900X? The main upgrades you will find on the newer X version are:

The BlackVue DR900X series of dash cams are now for sale: View them on Amazon