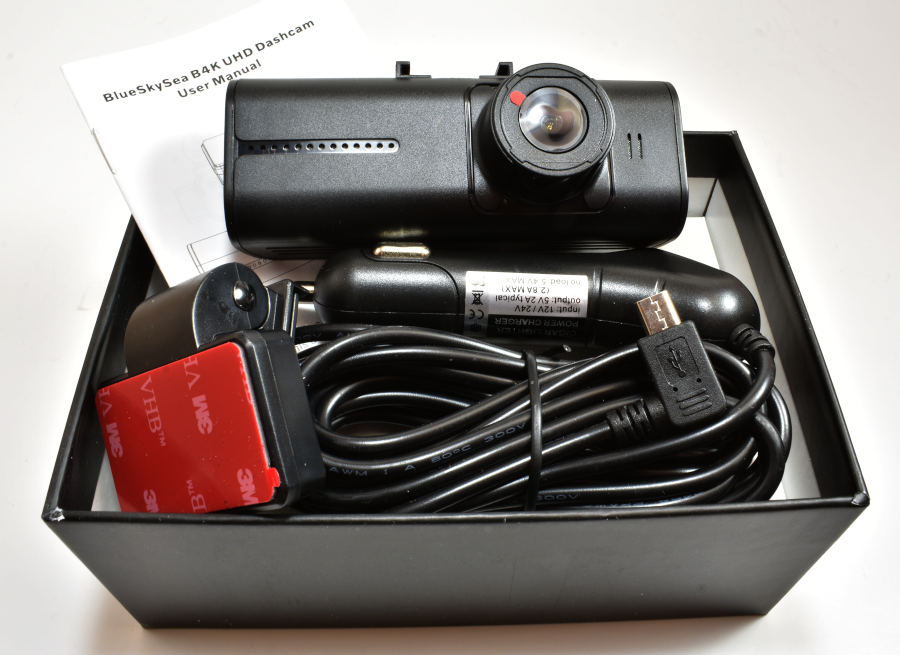 The B4K dash cam from Blueskysea is sold as a single car camera setup or a dual front and rear camera package. It records video in real 4K using its 8MP Sony image sensor.

This budget price dash cam has a wide range of features that many other car cameras in this price range lack, things like advanced parking mode options, GPS speed and route tracking, built-in WiFi for remote connectivity and a LCD screen on the back if you want to do everything right on the dash cam itself.

The Blueskysea brand has been selling budget priced dash cams for a number of years and have a good reputation within the industry for their cameras in the cheaper price category. 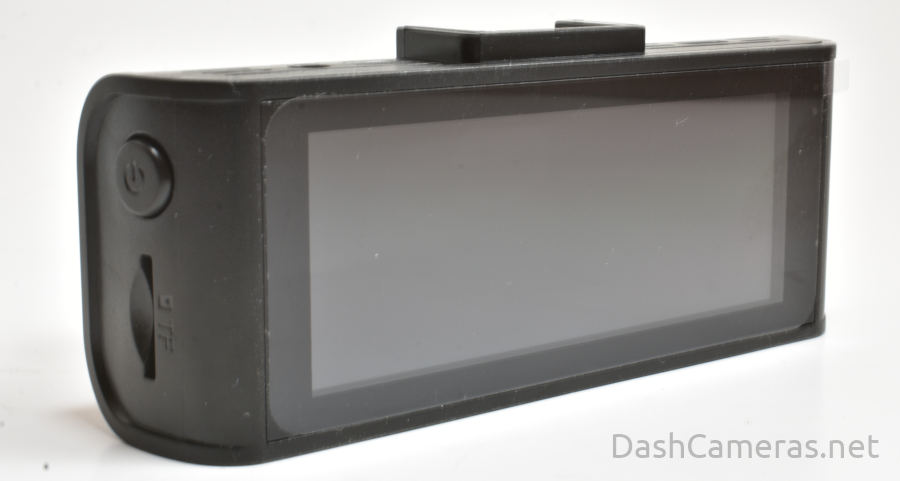 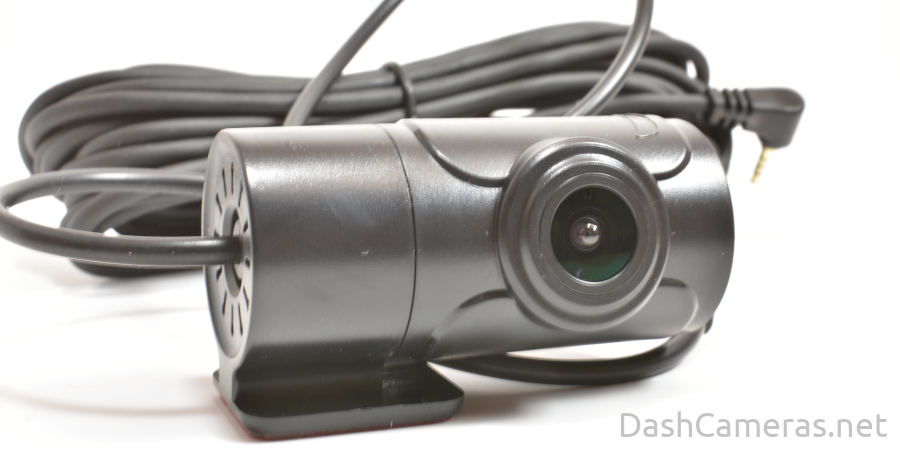 Unlike many dash cams you’ll find on Amazon and elsewhere that claim to capture “4K Video” while really recording a smaller video resolution and upscaling the file after to make it look like 4K, the B4K records real 4K. In order for a dash cam to record real 4K video they need to have an 8MP+ image sensor and the B4K uses an 8MP image sensor from Sony. Sony image sesnors are considered the best sensors to have in a dash cam because of their crisp and clear video quality in all lighting conditions.

With its Sony IMX415 image sensor the B4K is capable of capturing after dark or nightvision like video.

The front camera has a 120 degree lens angle (field of view) which is a bit smaller than other dash cams, but it is wide enough to give you full coverage around the front of your car.

The B4K does not have any built-in memory, so you will need to get a microSD memory card to store video files on. It uses what’s called “loop recording” and saves small 3 minute video clips and when the memory card gets full it “loops” back around and starts recording over the oldest video file.

What size memory card should you get?

Because it is always recording over the oldest video files, you really don’t need a huge memory card. For a dash cam like the B4K that records in real 4K, you would be fine using a 16GB memory card, although it’s better to get a larger memory card as it has to record over old video files less often and helps increase the life of the memory card.

The BlueSkySea dash camera supports a microSD card up to 256GB

Make sure you get a microSD card that is “Class 10” and one that says “high endurance” is usually better for a dash cam.

The Ucam app is used by a handful of other dash cams and is rather generic in branding. You can do basic functions within the app when your B4K dash cam is synced with it via wifi. Things like viewing videos on your phone, deleting videos and making dash camera setting changes.

The B4K comes with the basic parking mode options like impact detection which uses a built-in g-sensor to detect a sudden jolt or movement of your car, like a hit and run in a parking lot. This will automatically start to record video when this is triggered.

You can also have motion detection set so the camera will automatically record any time movement is seen on the front or rear camera.

This dash cam also has a more advanced parking mode feature called “buffered parking mode”, which means that the dash cam is continuously recording when parked over and over again in a loop, so if an event happens it will have video 10 seconds of video before the event actually happened. This could be helpful if someone sideswiped your parked car for example, it would have video footage right before and after.

If you plan on using any of these parking mode features you will need to use a dash cam hardwire kit or an external battery pack to power the camera while your car is parked and off. 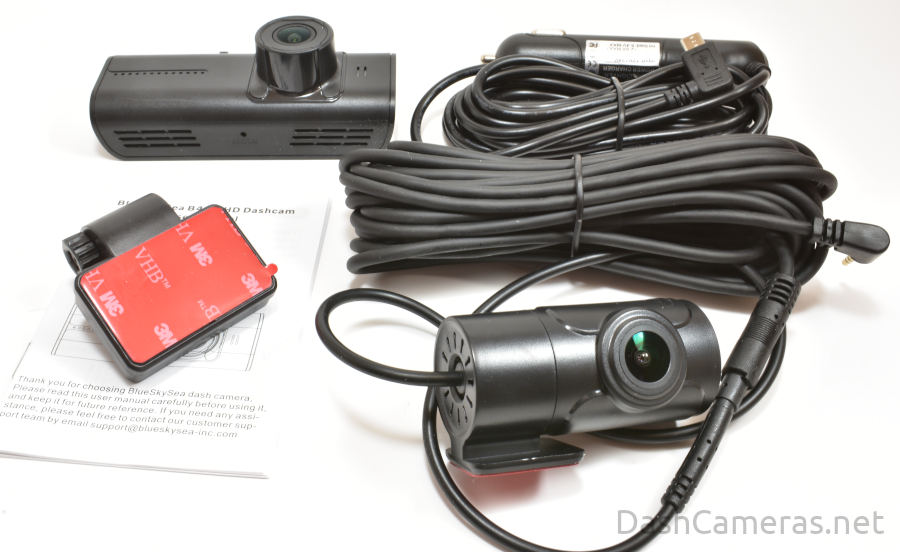 PROS and CONS of the BlueSkySea Dash Cam

With its relatively small and compact size, the B4K can be mounted right up and behind your rearview mirror. Since it automatically starts and stops with your car, you won’t need to be able to see it while driving, so having it hidden behind your rear view mirror and out of site is a convenient spot to mount it. It uses and adhesive mount that sticks to your windshield and won’t fall off like suction cup mounts often do. 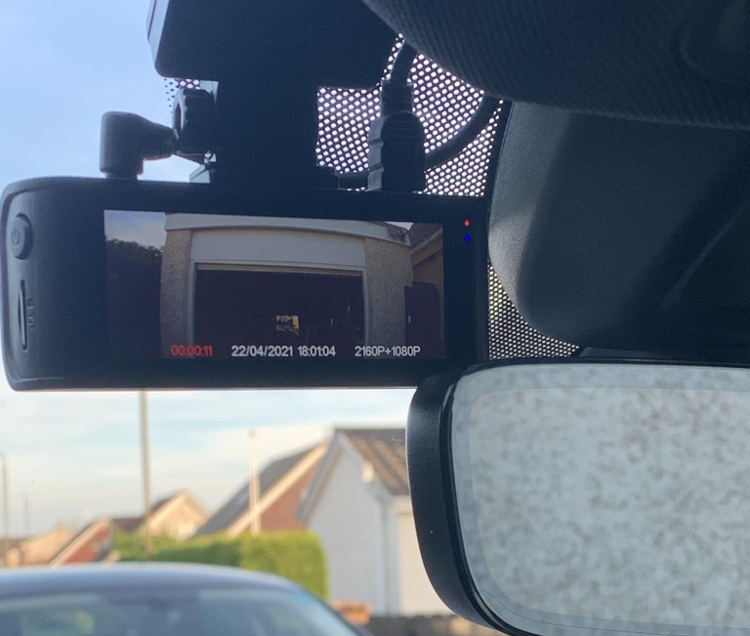 For more info on where to place your dash cam, read our Dash Cam Mounting Guide

Overall we consider this to be one of the best budget priced dash cams of this year that shoots in real 4K. Not only is the video quality up there for this price range, it also offers advanced parking mode options and remote wifi connectivity.