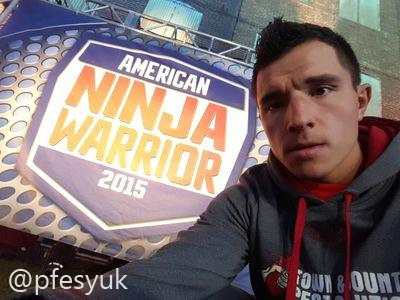 It was supposed to be another ordinary drive to work for exterminator, mixed martial arts fighter and American Ninja Warrior contestant Pavel Fesyuk, but when he noticed a man nearby in distress, he knew that there was something he could do to help.

While on his way to a pest control appointment, Pavel was approaching a red light and encountered a man who was standing outside his vehicle with his hands on his knees, clearly in need of help. Upon closer inspection, the pest control expert noticed that the man was actually choking to death, presumably as a result of eating something earlier on. That man was William Harris, who said later that it wasn’t food stuck in his throat, as he hadn’t eaten recently, but something was blocking his airway making it difficult to breath.

Pavel initially attempted to pat the man on the back, but to no avail. Attempting the Heimlich maneuver would prove rather ineffective as the victim was taller than Pavel and wore multiple layers of warm clothing on the cold winter morning. This is when the MMA fighter’s improvisation skills came in handy. 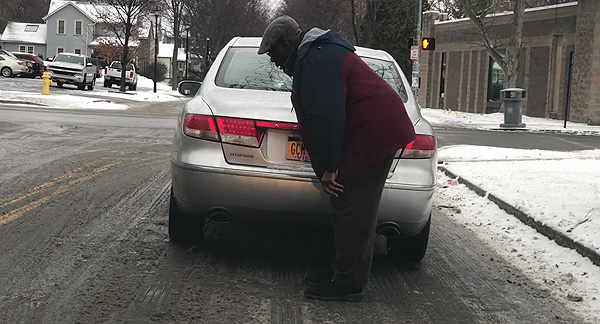 He decided to perform the Gabel Grip, a popular move used in the ring to pick an opponent up off the ground and throw them over. Pavel performed the maneuver a couple of times and it proved effective, dislodging the matter that was trapped in the victim’s throat. 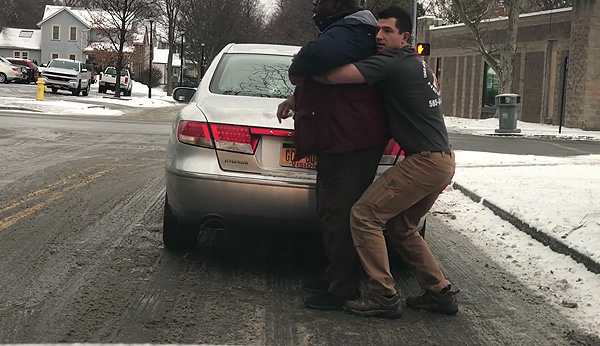 The video then shows the two men taking their separate ways after having a short conversation.

“He thanked me but it all happened so fast that I didn’t even get his name.” Pavel also pointed out that he just helped somebody and it only took 30 seconds out of his day.

William Harris, the man seen in the video struggling to breath said that numerous cars passed and people walked by, yet no one stopped. Not until Fesyuk came across Harriss while driving by and noticed something was clearly wrong and decided to take action.

Caleb Fabry, the president of the company Pavel works for, states that “This guy showed us in this video that nothing matters but life and love,” which is the company’s ethos. He also points out that “We believe that our business is successful and in the good place that we are in only because of our God. We give him all the glory.”

What makes the situation rather interesting is that, as Pavel states, the man was choking and clearly in distress, yet nobody cared. Other drivers and passers-by simply ignored the man, not even attempting to call others for help. If not for the exterminator’s respectful and considerate ways, the victim would have most likely faced a worse fate.

Pavel Fesyuk appeared on two seasons of the popular television show “American Ninja Warrior,” where contestants have to use their athletic abilities and skills to maneuver an obstacle course. The former contestant’s quick thinking and agility can be owed to his past career and had definitely played a part in saving the victim’s life. Pavel was regarded a hero back at work by his co-workers, but Pavel saw it as a simple good deed that everyone should strive to do whenever they have the opportunity.

The entire ordeal was filmed inside the company van via Pavel’s smartphone, which was making use of a dash cam app to record footage that day. Not only did this prove useful in the afore-mentioned situation, but dash cams are great for savvy drivers who could inevitably use the footage recorded in an incident for lawsuits and insurance claims.