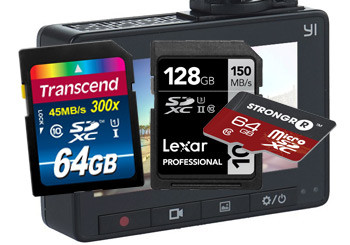 Car dash cams as of now do not have built-in memory to store the recorded footage; they use an external memory card to save the files. The type and size of memory card supported vary from one dash cam to another. Some dash cam units come with a memory card while for others you’ll have to buy it separately. Also, sometimes it may be in your best interest to buy a different memory card rather than using the one included in the package. So, which is the best memory card, and what should you look for while buying a memory card for your dash cam? Come, let’s find out. 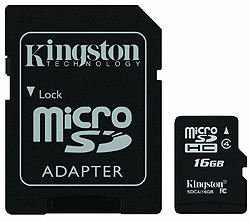 Storage Capacity – How Many GB?

Memory cards are available in different storage capacities but those up to 128 GB are quite common in the market. A 32 GB card is good enough to record 3-4 hours of HD footage of 1080 pixels; and given the fact that nearly all camera units have the relooping feature, it should be sufficient in most cases. But even then, it’s better to buy a memory card of highest capacity supported by your dash cam so that you don’t fall short of memory just in case you want to record something on the way. Taxi, Uber and Lyft drivers too may find it more useful to buy higher capacity cards and dumping the video footage on an external hard drive at the end of their shift in order to counter any complaints about their driving. Likewise, a dual channel dash cam may require higher capacity card since you would be recording footage from two cameras.

Most of the dash cams today are compatible with microSD card of up to 64 GB; though those supporting only 16 GB are also not uncommon. So, first check out the card capacity of your device before buying one. A wrong capacity card may either be rendered completely unusable or may be used only to the extent supported by your device; and you will not be able to predict how your device will respond to it. Also, a memory card of higher capacity than supported by your device may place unnecessary burden on it and may not be good for its health.

Speed class rating of a microSD card denotes how fast files can be written on the card. This is the minimum speed calculated in megabytes per second. Currently, Class 10 is the highest speed rating and denotes that files can be written on the card with a speed of at least 10 MB per second. Likewise, UHS rating implies that an SD card complies with Ultra High Speed bus. It is denoted by Roman digit I or II. A UHS-I card has a clock frequency of 100 MHz and can transfer data at a speed of 50 MB per second in 4-bit transfer mode. Similarly, a UHS-II card can transfer data at a maximum speed of 156 MB per second and 312 MB per second for full duplex and half duplex systems respectively.
For a dashboard camera unit, you can safely go with either a class 10 card or a UHS-I rated card. Often, a card may have both these ratings (class 10 and UHS-I); that’s fine too. However, keep in mind that UHS offers a faster interface for data transfer if and only if your device supports it. Most dash cams do not use UHS interface which means that you can’t reap the benefit of faster data transfer offered by the UHS bus, but nevertheless can use a UHS rated card with it.

The NAND type of a flash memory device indicates how it stores data physically. In an SLC or a Single Level Cell card, each cell stores 1 bit of data whereas a Multi Level Cell (MLC) card stores 2 or more bits of data per cell. Triple Level Cell (TLC) is an example of MLC type in which 3 bits of data is stored per cell. Cost wise, MLC is a cheaper option since it stuffs more data in less number of cells. But in all other aspects, SLC is far better than an MLC or a TLC card; it has higher endurance and offers faster data transfer with lower power consumption. Typically, an SLC has about 10 times more endurance than an MLC card. So, it’s always better to spend a few dollars extra on an SLC memory card.

Some brands of memory card exclude dash cams from their warranty. For example, Sandisk Ultra Cards are not covered by warranty unless you use their high endurance cards. So, you’d be better off steering clear away from them. Few companies have memory cards specifically designed for dash cams. If you are looking for a dedicated card for your DVR, it’s better to go with them. Also, beware of fake SD cards being sold at lower price.
To conclude, an SLC, class 10, microSD card would be the best memory card for all the major dashcam makes and models on the market.

You should always get the largest storing capacity memory card for a dash cam that you can afford. Even though the dash camera will having a looping feature that overwrites the oldest videos files when the card is full, you may choose to save video clips along your drive. These video clips are saved in a separate folder on the memory card and are not overwritten by the loop recording feature, thus taken up more space on your memory card. This should not be an issue if all you plan on using your dash cam for are an accident or emergency, but if you like to save random clips, like a sunset or other interesting things along the way, you should probably go for the biggest card you can get.

High endurance card that is good for loop recording on a dash camera, where the files are continiuosly deleted and overwritten on a regular basis