Dash camera or a dashboard camera is a car video camera used for recording incidents during driving a vehicle. It’s usually mounted on the dashboard or windshield of a car. There are basically 2 features that even the most basic models of dashcams offers over traditional video cameras – it starts and stops automatically and records videos in a continuous loop when you start your car and shuts off automatically when you turn your car off. Also called as Digital Video Recorder (DVR), a dash cam is intended to record an accident or other driving events so that it can be used as evidence to defend against traffic rule violations and for supporting insurance claims. However, dash cameras today come with a lot of advanced features to not only ensure driving safety and protection against vehicle accidents, traffic infractions and fraud, but to also share high quality HD videos of your driving with others.

If you’re reading this page, you are most likely convinced on the importance of having a dashcam in you car, if not, read our article Top 5 Reasons Why You Should Get a Dashcam

Earlier, dash cams could be seen more in police vehicles, but with prices getting more affordable (under $100), they are gaining popularity among private car owners as well. If you too are considering buying a dash cam for your car, this buyer’s guide will help you understand the important factors that should go into your buying decision and the marketing fluff you can safely steer away from.

Most of the dashboard cameras are manufactured in China, Taiwan and Korea. Pricing, features, performance and reliability vary widely between different manufacturers, brands and models. Even the buying preference varies with one’s budget, requirement and usage. So, this buying guide does not intend to recommend any specific dash cam to you. Instead, it intends to equip you with the information that would enable you to decide the best dash camera for you all on your own.
Here is what you should look for while buying a dashboard camera. 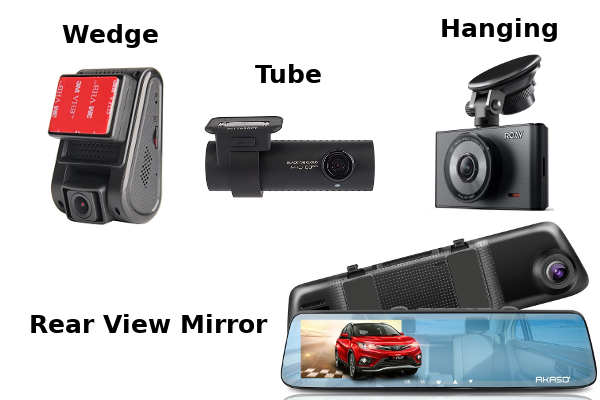 Most of the dash cams are meant to record incidents only on the front side of your vehicle but if you also want to record incidents on the back side of your vehicle (say for instance, someone driving rashly close behind your car), you need to buy a dual channel camera. A dual dash cam has 2 cameras – front and rear. Some dash cam units also have a second camera to capture passenger cabin; these are especially targeted at taxi, Uber and Lyft drivers, and won’t be any help for private cars, but are a common dashcam setup for Uber and Taxi drivers.

Battery Powered or Capacitor Based?

A dash cam usually uses either a capacitor or a battery as backup to save files when it stops receiving power from the vehicle. Capacitor based cameras are more resistant to heat and are thus more suitable for use in extreme temperatures. They are also more reliable and lasting when compared to battery powered cameras. The downside however is that they are typically more expensive and hold less power. Batteries on the other hand are prone to leakage, overheating and explosion but they can hold about 5-10 times more charge than capacitor; so you can use a battery powered dash cam just like a camcorder in case you need to record something on the way. One common misconception among new dashcam buyers is that the battery is meant to power the unit in a similar way as a digital camera battery would. This is not the case. Dashcam batteries are not meant to be used to power the unit while recording video, the battery is only meant to keep the camera on for a few seconds to save the video file after you have turned your car off.

Clarity and Quality of Recording

Better video quality will help you capture more details like car license plate numbers and people’s faces. You may not notice much difference in day time recording with sufficient lighting but the real test begins at night. In order to have clear videos during nighttime and in low light conditions, your dash cam will need to have good dynamic range, higher ISO, and several other optimizations like buffered recording, separate nighttime camera, etc. for good night vision video.

The quality of videos mostly depends upon image sensor, processor and the lens. Glass lenses are considered far better than plastic lenses. Field of view of the lens decides how wide your camera can capture. It shouldn’t be too narrow; else you will miss capturing objects on the sides.

While most low to mid price dash cams record in 1080p, which is often enough to document a major incident on the road, there are now dash cams being sold that shoot in full 4K video. This can help increase the clarity of the video and allow you to zoom in better on license plates. However, you can typically only record at 30 frames per second while recording in 4K. When in 1080p many dash cams will allow you to shoot at 60 frames per second. This means you are getting double the frames, which can be helpful for identifying a license plate at high speeds.

Most, but not all dash cams come with audio recording capability. Some dash cams do not give you the flexibility to turn off the mic. So, look out for these features if you are particular about recording sound as well. A nice audio mic feature to have is a standalone button that allows you to turn off the audio recording with the click of a button, rather than having to scroll through a menu. This comes in handy if you have audio recording turned off and want to easily turn it on during a police traffic stop for example.

G-Sensor detects jerks and unusual movement in the vehicle and automatically sends the camera into action whenever there is an incident. Apart from automatic recording, it also locks the footage against deletion during relooping. When you memory card is full and the camera is recording over it again, the file that was involved in the accident or impact will be saved and protected. Though this sounds good theoretically, G-Sensor is never that perfect as it is made out to be. Practically, it’s useless for accidents in a running vehicle since it often records false incidents. However, it’s very useful for monitoring a parked vehicle. Parking mode allows you to record an incident like vandalizing or a hit and run case when you vehicle is being parked. Check out how parking mode is to be activated in your dash cam – some cams have automatic activation, some through pressing a button, and others through a menu.

Parking mode is a feature that comes included with many dash cameras, however, they can vary greatly. Many of the cheaper, low-end dash cams have poor parking mode functions that don’t often work properly.

When using the parking mode feature on most dash cams you will need to have either a hardwire kit or an external battery to power the dash cam when your car is turned off. A hardwire kit is relatively cheap (around $15) and fairly easy to install. To install you simply plug a wired fuse into your fuse box on your car and screw down a grounding wire.

A dash camera in parking mode sits in a stand-by mode until an event happens to trigger it to start recording. Most often, it is either triggered by an impact detected by its g-sensor, or by motion. Cheaper dash cams will start recording right when an event is detected, only capturing video right after the event. High-end dash cams will use what’s called buffered parking mode, which is always recording in a 15 second or so loop. So if there is an event the dash cam will be able to have video 15 seconds leading up to the event.

GPS adds time and location details to the footage. Dash cams supporting GPS may either have it as an inbuilt unit or as an optional addon module to be purchased separately. GPS unit usually also has several ADAS features integrated with it. Most popular among them are Lane Departure Warning System (LDWS), Forward Collision Warning System (FCWS) and speed alerts. If you really need these, make sure they work properly for the given brand/model; more often than not, they throw up false warning which may unnecessarily annoy you.

Most people prefer a stealthy dash cam to avoid inviting unnecessary attention. So, you may want to go with one which is small and which can easily get camouflaged with the interiors of your vehicle. Many early consumer based dash cameras had a more flashy looking design, with chrome/silver looking highlights to make it look of higher quality, now the trend is all black and as discreet as possible to help deter theft. These stealthy type designs often have a small to non-existant LCD display, so to play back the footage it may require an external device like your computer or smartphone. Depending upon what suits your choice, you can always do a tradeoff between stealth and style.

Dashboard cameras are usually attached to the windshield of your vehicle using either suction mount or tape/adhesive mount. A suction cup mount is reusable and easier to detach but if not strong enough, it may vibrate and even come down over time. Suction cup mounts work well if you want to completely remove your dashcam setup on a daily basis, but they may fall off often in higher heat and direct sunlight. Some dash cameras are designed to be attached on the mirror instead of the windshield. These can either be built-in in the mirror (which will require mirror replacement) or can be attached using a mirror grip or a mirror clamp. A more permenant setup is to use a dashcam with a mount that uses a self-sticking adhesive for the mount. Although the mount may not easily be removed, your dashcam will be able to be taken on and off of the mount with ease, only leaving the stuck on mount.

Some dash cams use a USB cable while others use a power port. Most of the high end cameras come with accessories like car power adapter, wire clips and card reader. Some choose to have their dash camera hard wired into their car, where the power connection from the dashcam is spliced directly into the wiring of the car. Hard wiring your dashcam into your car is usually best left to the professionals to do and not recommended for a first time buyer.

If you’re a semi truck driver who wants a dash cam in your big rig, you will have to take extra consideration to what kind of camera you pick.

Apart from above, other considerations that may go into your buying decision may include ease of menu/navigation, kind of warning/notification system, startup time, WiFi connectivity, physical durability, memory card compatibility, price, warranty, and customer support.

Always use caution when buying a dashcam on person to person marketplaces like eBay, as there are many counterfeit dashcams being sold using false claims on the specs of the cam.