You might be wondering what the major differences are between all the Gamrin Dash Cam models. While many of the Garmin dash cameras share the same dash cam housing and body, some have subtle and major differences when comparing them together.

Below we will give you a review of each Garmin car camera as well as a comparison with similar Garmin Dash Cam models. 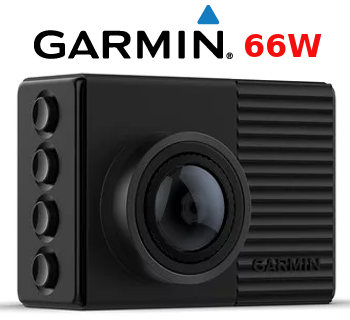 This is the updated version of the Garmin Dash Cam 65.

The 66W dash camera from Garmin is one of their higher end models for their single cam dash cams. It records video at 1440P which is often referred to as Quad HD (QHD). With its wide 180 degree lens angle it makes it one of the widest among comparable dash cams, ensuring you will have total video coverage of the entire front area of your car.

It comes with all the driver assist type features like forward collision alerts, lane drifting warnings and “Go” alert which tells you when the car ahead starts moving again at a stop light.

With the voice control feature you can start and stop recording, take a picture or disable audio recording among other commands.

With its built-in WiFi you can remotely connect to the dash cam using your Android smartphone or iPhone. This will allow you to directly download videos to your phone to share with others, or to make dash cam setting changes. In order to use this feature you will need to download the free Garmin Drive app. If you don’t want to use your phone to interact with the Garmin 66W, you can do so directly on the dash cam using the 2 inch LCD screen on the back, making it easy to enable or disable audio recording for example.

What’s the difference between the Dash Cam 65 and the Dash Cam 66W models? The 66W model is the newer one with some updated features not found in the Dash Cam 65. The added features on the 66W include: Garmin High Dynamic Range (HDR) Clarity which helps in low light conditions, larger microSD capacity of 512GB and the ability to be used with the Garmin Drive APP for Android and iPhones. 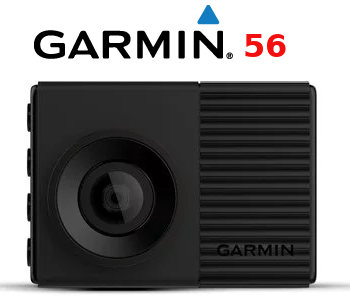 The Dash Cam 56 has many of the same specs as the Garmin Dash Cam 46. One of the main differences between the 2 dash cameras is that the newer Dash Cam 56 has a higher video resolution of 1440P, while the Dash Cam 46 only has a 1080p video resolution. Along with improved video quality it also has a higher photo resolution of 3.7 MP. It has a 140 degree lens angle, while it should be wide enough to capture most of the front of your car and the road ahead, it’s not as wide as the newer models, like the Dash Cam 66W that has a 180 degree field of view. However, with a wider lens angle you do tend to lose some quality and get a fish-eye type look, so having the 140° lens angle might be a better option for you.

Garmin’s Dash Cam 56 is their mid-range dash cam both in price and features. An upgrade from some of Garmin’s older dash cam models is the ability to use a larger microSD card with the Dash Cam 56. It will take a 512 gigabyte microSD card, that’s more than half a terabyte of video storage. Chances are you probably won’t need a memory card this big though, as the dash cam will record over all your previous videos when the card gets full, so you would actually be fine with a 8GB card if you only wanted a short video clip in the case of an accident.

The Dash Cam 56 model comes with WiFi built-in so you can use the Garmin smartphone app to connect to the dash cam directly on your phone, letting you download videos or make changes to the general settings. 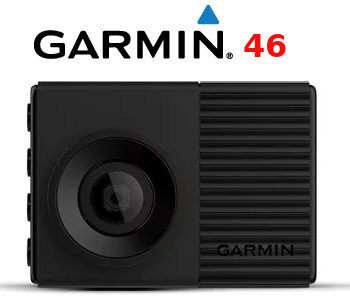 With the Dash Cam 46 you can use all of the same features found on some of the newer and more expensive models like Voice Control and Garmin Drive APP use with its built-in WiFi.

If you’re looking for the best budget Garmin Dash Cam model, this would be it in our opinion, as it is only lacking a few features of the higher priced models, like a wide 180 degree lens angle that is found on the Dash Cam 66W (the Dash Cam 46 only has a 140 degree lens angle). This shouldn’t be an issue if you drive a standard size car or pickup truck, since you won’t need a large field of view on your dash cam. This might be an issue if you’re a trucker driving a big semi and need to have an extra wide lens angle to cover the full front and peripheral of your big rig.

What are the major differences between the Garmin Dash 45 and 46 models? If you were to compare the 2 side by side the only thing that is different is on the Dash Cam 46 you have a wider lens angle of 140 degrees, while on the Dash Cam 45 it is 122 degrees. The 2nd thing is that the Dash Cam 46 has a larger microSD memory card capacity of 512GB, while the Dash Cam 45 can take up to 64GB. Both models are usually sold around the same price, so we would recommend buying the Garmin 46 over the Garmin 45. 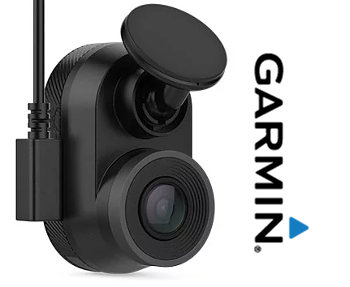 Garmin has already had a line of small and discrete dash cameras on the market, but the Dash Cam Mini is even smaller. Garmin has photos of the dash cam next to a car key and the Garmin Mini is shorter than the car key, giving you an idea on just how compact the camera is.

Even with its small size, the Mini has many of the same features as the bigger and more expensive Garmin Dash Cam models.

With built-in WiFi you can use the free Garmin Drive app to connect your Android phone, iPhone or tablet directly to the Dash Cam Mini. Once connected you can download videos on to your phone and share them online. Because of the small shape of the Dash Cam Mini, you might want to mount it up and behind your rear view mirror, which is out of sight and sometimes hard to reach the buttons on the camera. Using your phone synced to the Mini, you can make all the dash cam setting changes right on your phone without having to reach up and behind your rear view mirror.

An upgraded feature on the Mini compared to the older models is the larger memory card capacity. You can used a 512GB microSD card in the dash cam and this will give you nearly 50 hours of video storage, although this is not necessary unless you want to archive video. The dash cam will automatically record over the old files and keep recording.

How much video footage you can record on various Garmin Dash Cams with different SD memory card capacities. The following record times are done while recording at 30 frames per second (30FPS), with the highest video resolution for the dash cam.

We recommend getting a “High Endurance” SD memory card that can handle video recording and the frequent overwriting of old video files like you have on a dash cam. It should be at least a “Class 10”, which is the write speed of 10Mb/s.

The Samsung PRO Endurance series of microSD card is a good choice for Garmin Dash Cams.

You will need to format the memory card before you begin to use it. To do this, simple insert the microSD card into the slot in the dash cam. Once it’s in, power the dash cam on and go to the basic menu settings and go to: “Settings > Camera > Format Card” and select OK to format. This should be done about once a month or so to ensure that you don’t have any corrupted files (be sure to backup any video you might want to save before doing so).

How to use the Garmin Dash Cam Voice Commands, here is a list of commands:

“Save Video”
Will lock a video and save it, preventing it from being recorded over

The camera plays a tone when it recognizes your command.

The Drive App is offered for free by Garmin to directly connect your Android phone, tablet or iPhone to their dash cams. The APP can be found in Google Play Store and in the Apple App Store.

Save videos directly on to your phone or tablet, making it easy to send and share video clips.

Get updated traffic info for your area.

See parking trends and pricing in the area where you’re driving.

Gives you access to more than 10,000 traffic cameras you can view to see the local conditions in real time.

Keep your eyes on the road and not on your phone. Smart alerts on the dash cam let you know if your phone gets a text message, calendar alarm or notifications from other running apps.