The Garmin dēzlCam is one of Garmin’s more recent attempts to keep up with the times as services like Google and Apple Maps overpower standalone GPS navigators. Some of the most noticeable benefits of the dēzlCam are a 7” touchscreen, a voice-controlled navigation system, and a built-in dash camera. Given the fact that dash cameras usually cost a few hundred dollars, a dash camera with a built-in Garmin GPS and wide touchscreen make the dēzlCam seem like a good deal on the outside. But does the product match the price tag?

Garmin does not have video quality information on their website, but they do have a GPS overlay option you can add to your footage and the wide screen makes it easy to play back. It is also detachable from the mount, which makes taking a picture of any accident easier. The camera has some features that are often found in newer cars like forward collision and lane departure warnings.

The camera/GPS boasts an app called Smartphone link that allows the user to upload and share videos on the app, gives the user real-time weather and traffic updates, and uses a bluetooth connection for hands-free calling. The user can also get notifications from their smartphone to appear on the dēzlCam’s screen and the built-in WiFi connection automatically updates the GPS. The GPS provides TripAdvisor ratings for restaurants, hotels, and other popular places and announces turn by turn directions. A Garmin backup camera is sold separately and connects with the dēzlCam so that the user can see the footage from the backup camera on the screen. An important thing to note is that most additional accessories are able to be connected to the Garmin dēzlCam, but only if they are Garmin branded as well. Backup cameras from other trucker brands like Rand McNally will not work. 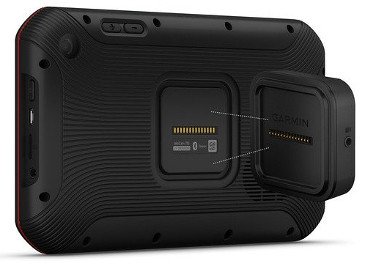 This device seems to be oriented towards truckers. While it could be used by the average person, there are a lot of features that would really only benefit truck drivers. The GPS features truck routing, which can optimize your route based on the vehicle you’re driving. After entering your truck’s size and storage details, it will show you relevant route warnings like bridge heights, sharp curves, and steep grades for most major US roads. If you have numerous trailers, the GPS has a profile system where you can save the dimensions of multiple trucks for easy use. Although this camera and GPS is mainly for truckers, there is a standard car mode to use in a regular automobile.

There are other features that have less to do with the GPS and more to do with driving a truck. The GPS notifies you of points of interest like food, fuel, rest, and shower areas. It also helps find parking areas for those stops. The service facility locator has a built-in directory of service stations in the US and Canada and allows the user to log when the vehicle underwent maintenance as well as when the vehicle had its last oil or tire change. Fleet operators can track where their drivers are and send addresses through text. Drivers can then pull up that text from their Garmin dēzlCam and the GPS will automatically route them there. Another convenient tool for fleet operators is the Garmin eLog compliant ELD. Although it is sold separately from the unit itself, it is a convenient way to track a driver or fleet’s Hours of Service without needing an additional device.

Like any camera, the Garmin dēzlCam has its pros and cons. The convenience of having a GPS with live traffic updates, built-in TripAdvisor reviews, a WiFi and bluetooth connection, trucker-friendly features like fleet tracking and hour logging, and a fully functioning dash camera is highly appreciated. Instead of having to worry about using a mobile device for a GPS while travelling, a device that takes care of all of that for you is convenient. It’s nice that it provides reviews for the places you pass by while you’re travelling right on the GPS. The camera itself also looks pretty sturdy compared to other cameras, which works well when you’re in a large vehicle that might travel on bumpy roads from time to time. 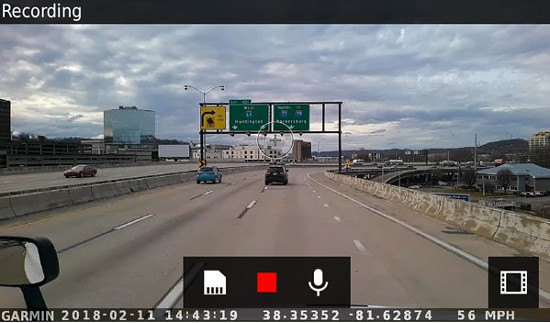 Some of the cons have to deal with the size of the camera and its accompanying equipment. To alleviate this, Garmin made two sizes of this product. If you’re driving a smaller vehicle, go with the 5” instead of the 7” model. This camera is also not independently adjustable, unlike many other cameras used in smaller vehicles. instead of moving it around in a ball joint, the user needs to move the whole device to change the camera angle. While this might not matter for some truckers, normal drivers may have an issue with this. The camera is attached by a suction cup mount but there are several reports of the suction cup being too small and falling off the windshield. The mount is also much shorter than mounts from competitive GPS/dash cameras for truckers, so if you have a mount from another brand like Rand McNally, you might want to use that one so you can operate the camera while sitting in the truck.

Some other complaints come from truckers themselves. One of the major issues is in the mapping features. Many truckers report difficulty trying to find fuel stops and parking while some report that the GPS brought them to strange roads that ended up being out of the way of the route. The GPS does not show the speed limit of the road the vehicle is on and many roads are simply not on the GPS at all, including the addresses of delivery locations. The map page is also difficult to customize and some are frustrated with large icons on the GPS screen that they cannot remove. While some are appreciative of the Android operating system, some say that the GPS and interface is slow, especially when used with the dash camera. Additionally, probably due to the fact that the camera has so many extra functions aside from the camera, the footage is subpar to most other dash cameras on the market. If you’re not careful with your camera placement, the video will come out shaky and unusable. Other complaints include a slow downloading speed on update files, a lack of certain features like weighing stations, frequent reboots, no inclusion of an SD card, an unsatisfactory Android companion app and the camera interfering with the driver’s line of sight.

Overall, it seems like the issues with this device outweigh the benefits. While this camera has many features, it seems like it strays away from the core features of a camera/GPS system. It is clear that the camera was an afterthought and that it is primarily a GPS device. Cheaper dash cameras provide better image quality and more camera flexibility, while cheaper GPS devices have the same rating features and more up to date locations that update automatically. The Garmin dēzlCam has some unique trucking features but many are already loyal to other brands made specifically for truckers, like Rand McNally. It looks like the Garmin dēzlCam isn’t worth the high price for its mediocre features.