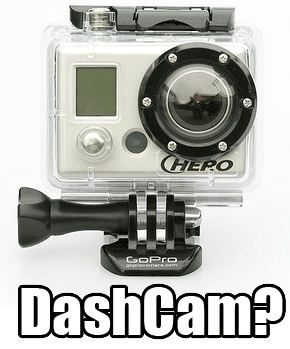 With the popularity of GoPro action cameras, quite a few people have tried to use them as dash cams. These tiny cameras are great for recording action footage or for shooting video in tight quarters, but they can’t beat dash cameras at the job they were designed for. Is it possible to use a GoPro as a dash cam? GoPro HERO and the GoPro Session come in a small and compact package, which seems like a good choice to mount on your windshield, but if you’re considering a dash camera, here’s why a GoPro may not be the best camera for your car.

With a dash camera, the moment the car starts, the camera does too. All dash cameras from reputable makers use power and motion sensors to control recording, letting users drive worry-free. Using a GoPro, on the other hand, can be a hassle, as you’d have to turn it on, verify the recording mode, hit record, and manually turn it off when you stop. A process that’s reasonable when you’re shooting a time lapse on a road trip, but one that would quickly become a hassle if you were forced to do it every day.

The issues get worse, too, once you stop the car. Most dash cams have motion sensors, letting them sit in a low-power mode until something moves near the car. This is a great theft-prevention feature for when you’re at the grocery store or out and about, as it’s guaranteed to catch the activity of anyone approaching the car. With a GoPro, you’re forced to either leave it recording (filling up your memory card and draining the battery) or to turn it off and hope for the best.

On the topic of memory cards, it’s also important to keep in mind the biggest feature of dash cameras: Loop Recording. When a GoPro fills up a memory card, the adventure is over — you’ll have to empty or replace the card in order to keep going. With a dash camera, it can automatically loop over old footage while intelligently preserving footage surrounding sudden speed changes, swerves, or stops, as well as user-selected segments. Setup properly, a dash cam serves as an excellent safety tool. 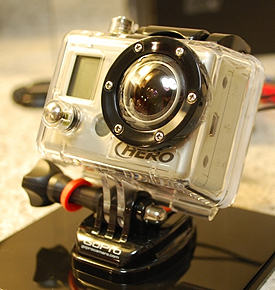 GoPros are great for action sports, but they have some surprising weaknesses when it comes to long-term use. The number one factor that threatens dash cameras is heat, as cars left out in the sun can quickly heat up to over 120 degrees on a 78 degree day. According to the GoPro support page, their cameras will automatically shut down when they reach 125 degrees, which creates a slim operating range for users.

In comparison, dash cams are built to operate in these conditions, with operating ranges as high as 140 or even 160 degrees. This means that dash cameras will function better — and last longer — than action cameras in these circumstances. Using a GoPro in hot conditions like these can result in-long term damage that can eventually destroy the expensive cameras. Dash cameras will last longer, perform better, and cost significantly less, when used in the same conditions.

The average battery life of a GoPro Hero 4 is slightly less than two hours. The stock dash mount and housing for the action camera doesn’t allow for continuous power or external power packs, and both solutions have been known to cause overheating issues in normal temperature environments. There are plenty of professionals who have created custom mounts and charging systems, but asking the average consumer to create their own charging harness and mounting rig is a tall order.

Dash cams are designed to be powered by the car charger, without the overheating or wiring issues. They often come with wire management tools to remove the hassle of wiring them in, and their internal batteries are more generous (and less trouble-laden) than what GoPros come with. Dash cameras are designed for the job.

GoPro cameras are expensive, visually distinct, and popular. There’s an active resale market for action cameras, which means that GoPro cameras are big targets for thieves. Leaving a GoPro mounted on your dash will turn your car into a target for smash and grab thieves. Dash cameras, on the other hand, are designed to be small, discreet, and hard to notice. A well-positioned dash camera makes for a perfect security tool, while a GoPro can often be a security risk.

Dash cameras are designed to be used on the go. With rear screens and easily accessible buttons, it’s relatively easy to adjust your settings while you’re out and about. GoPros have a total of three buttons, a small front screen, and no review features. And while it is possible to purchase attachable screens or to connect your mobile phone to the camera, these features are complicated, expensive, and battery-draining.

GoPros are great at what they’re made to do: film action sports. You might be able to use one to record short clips of scenic road trips, but when it comes to regular dash camera use, GoPros just can’t compare. They are a good option for a daily motorcycle rider who wants to have the safety and security of video footage of their daily commute, as they can mount it to their helmets, where a traditional dashcam would not work well. But for your car, the downsides far outweigh the benefits, and when you look at the price, you’ll be able to get a lot more value out of a dash camera. There have been many DIY people who have created their own GoPro dashcam mounts to attach to their car windshield and other mods to make it a more user friendly dashcam, but these efforts take many hours and extra money to achieve these results. With nearly all new dashcams coming with HD video and tons of safety features, often for prices well under $100, you’re better off getting a dedicated dash camera designed for this very purpose.