Ending a relationship is seldom a smooth process. Grudges are held, insults are exchanged and things often take a turn for the worse. This is evident with the case of a man whose car has been vandalized by his ex-girlfriend’s new boyfriend multiple times in his work parking lot. 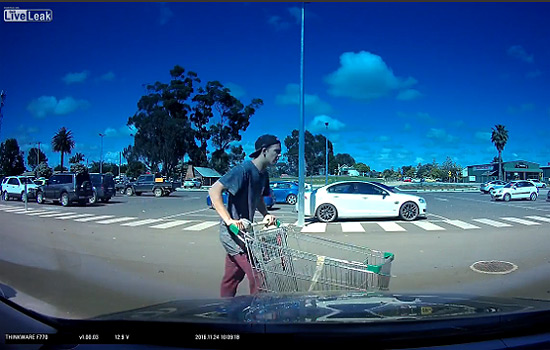 Over the past 11 months, the unlucky victim’s car has been damaged 5 times. At first, he didn’t suspect anything. But after the second time, he knew something was up. He was suspicious of his ex-girlfriend’s current boyfriend, but he didn’t have any proof to back it up. To find out who the suspect was, he bought a dash cam for his car and placed it inside where it could record anything that happened in front of his vehicle. When his car was damaged again, he checked his dash cam for footage and found the suspect, which happened to be exactly who he thought it was. This was enough proof to substantiate the fact that it was the ex-boyfriend.

In the footage posted online, you can see the car parked in a shopping mall parking area near where the car owner works. A man with a cap walks toward the car and grabs a shopping cart from behind the vehicle. He walks around the car while looking around for any witnesses and then proceeds to slam the cart into the rear passenger door. You can hear the impact sensor on the dash cam activate as the door is hit, indicating that damage has been done to the car. The man proceeds to casually walk away as the shopping cart is dragged away by the wind, oblivious to the presence of the dash cam. The victim uploaded an image of the damage the suspect did to his vehicle, showing a significant dent on the rear door.

If not for the dash cam placed inside the vehicle, the suspect would still remain a mystery to this day. The footage recorded was enough evidence for the victim to take legal action, as it clearly showed what he did. Modern dash cameras are great for situations like these, as they have features designed specifically to combat vandalism and hijackings. Most dash cams have the ability to start recording whenever they detect motion. These dash cams are usually also capable of taking a snapshot of the incident and uploading it to a cloud service or to the owner’s smartphone via an app.

Dash cameras are generally cheap and can be placed anywhere inside a vehicle. These cameras are the best chance the general public has at combatting damage done to their vehicles, whether it be vandalism, a hijacking or an accident. Not only do they serve as a viable security measure, but also as evidence for insurance companies that will help you make a claim when you have been in an accident.

The dash camera used in this video was a THINKWARE TW-F770 dashcam, which features full HD video, parking mode with motion detection and a g-sensor for impact detection: You can buy this dash cam on Amazon here: http://amzn.to/2gJ0N8F