The Street Guardian SG9663DC is a high-end dual dash camera. Both the front and rear cameras record in 1080p (full HD) at 30 fps. It has a Novatek 96663 Processor and a Sony IMX291 STARVIS CMOS Sensor for great visuals. It comes with a built-in GPS, which is nice because some cameras require an additional purchase for this. An additional 1080P StarVis sensor with back side illumination is included for high quality night vision. The camera comes with a 64GB SD card but there’s an option to upgrade to a 128GB, 256GB, or a 400GB SD card. Like most other cameras, the SG9663DC has loop recording, a G sensor and file protection.

Sometimes dual dash cameras sacrifice video quality for the increased coverage of the two cameras. Most of the time the rear camera will not record in HD but the front camera will. Because of this, sometimes it’s difficult to see accidents that happen behind you. Small details will not be picked up as well on the rear camera than on the front camera. Unlike other brands, the Street Guardian has pretty even image quality on both cameras. The Street Guardian records in 1920 x 1080 at 30fps with both the front and rear cameras. This resolution is much more than the average person will need but is definitely something for enthusiasts to enjoy.

There are a things the Street Guardian lacks, but they are few and far between. One of them is a way to mount the rear camera so that it faces the cabin instead of the outside window. If you want a dual dash camera that is for the inside of the car you might want to get a camera specifically for that with additional lighting for darker filming. There aren’t that many additional features other than recording footage and this could bother some people. This camera is advertised as a ‘set it and forget it camera’. Street Guardian specializes in cameras without a lot of bells and whistles that perform the core functions of a dash camera well. This means that there’s no built-in WiFi connection and there’s no companion app to share your videos without taking out the SD card. WiFi features are a relatively new addition to dash cameras but they have quickly become a staple. While this feature is not necessary it is still a good feature to have. Overall, this doesn’t make or break the camera but if you heavily rely on WiFi features in a dash camera you might want to consider other options.

Although the Street Guardian is a ‘set it and forget it’ camera, it does not have a g sensor for its parking mode, just for regular recording. In other words, if something hits your car while the camera is parked, the camera will not sense it. While this might not matter for certain people, others who park their cars in more crowded areas might find this a problem. The audio is also somewhat low when comparing the Street Guardian to other cameras. While most people don’t need dash camera audio, if you have a run-in with law enforcement it might be nice to have sharp audio documenting the conversation. Both of these features are somewhat minimal when comparing it to the rest of the camera’s quality, but they could factor into some people’s decisions when purchasing a camera.

This camera is also meant to stay mounted in one place. If you want a camera that is small and flexible and can pivot ot capture the action, you might want to get a different camera. The Street Guardian brand is all about buying the camera, setting it up once, and not worrying about it later. The Street Guardian brand also doesn’t make the smallest cameras. While they are inconspicuous for the most part, there are other camera brands out there that provide smaller cameras with lower profile cables and connectors. The brand claims that there will be a new device coming out in the future where the front and rear cameras will be attached to one main unit, but for now, if you want a smaller device it will probably have to be one with a single camera. Additionally, the manufacturers of the camera chose to emphasize camera quality over maneuverability. A camera with a wide lens and good quality will likely be able to capture everything that’s going on without the need to move it.

Most other problems can be solved with Street Guardian’s great customer support. The SG9663DC comes with an SD card and a one year warranty. Registering the camera online gives you 12 more months of customer service. Street Guardian is well known for their customer support. They respond quickly and efficiently, regularly add updates to all their new systems, and even respond to people on popular dash camera forums. They are transparent about bug fixes and even delayed the release of some add-ons like the hardwire cable in order to ensure that all of their products work well. The hardwire kit is now available in addition to the latest and greatest firmware upgrades.

This camera is very high quality and the price definitely reflects that. The Street Guardian brand is pretty well known for making cameras at a high price but that perform well. It appeals to mostly everyone in the market for a dash camera from novices to experts. While this camera is on the pricier side of the spectrum, it is definitely a solid piece of technology. While it might not have the most up to date bells and whistles, it’s something that will work well every time without any extra work. It also comes with great customer service that adds a lot of value to any Street Guardian product. It might seem like this camera is a bit too expensive if it’s your first time buying a dash camera but a well-made product like the SG9663DC will last for years and has a solid warranty in case it doesn’t. This product may not be for everybody but it is a great buy for many people. 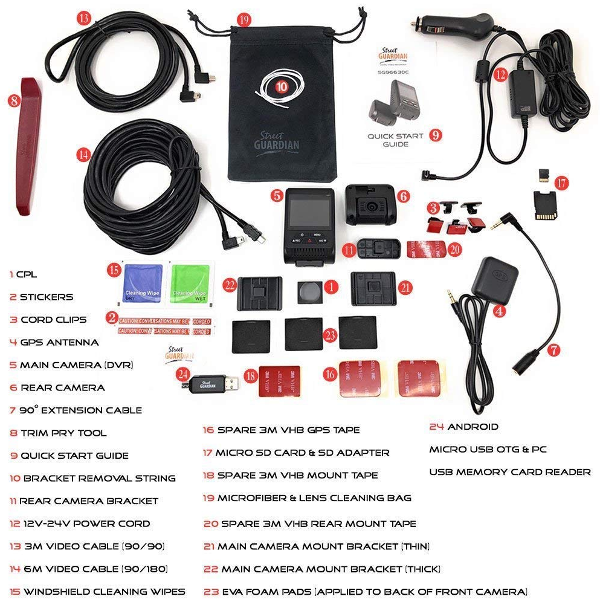