It records at 1080p and has a resolution that goes up to 1920p x 1080p at 30 frames per second. This particular camera operates by touch with a 10-inch IPS touch screen with a 1280 x 320p resolution. The camera itself supports up to a 128 GB SD card, which will record around 31 hours of 1080p video. It also has an image processor that highlights contrast at night, which results in better night vision quality. The camera also comes with a rear camera that records behind you as you drive, which is dust-proof and waterproof. Both cameras have a wide-angle lens so the front has a view of 170 degrees and the back has a view of 160 degrees. Speaking of a great view, this camera also has backup assistance mode that automatically shows you a back view of the car when you shift into reverse. The display can be changed in the settings to better suit your preferences and will give you the option each time you start your car. Just like every other dash camera, it has a G sensor that locks footage recorded immediately after the sensor is triggered in case an accident occurred with multiple sensitivity settings. This camera does have a speaker, but the visuals are usually a lot more important on a dash camera than the sound. The speaker is also on the front camera, so it probably won’t record a lot of audio that happens outside of the car. There is an option in the settings to turn the microphone on or off while recording.

Unlike most cameras with LCD screens, this one has a touch screen so you can edit image settings through the screen itself. While this might be an innovative feature to some, others might find this intrusive, especially since this screen also functions as a rearview mirror. The screen can be convenient though as it has the capacity to show you the front camera and rear camera view at the same time while driving. The front camera operates through a swivel ball so it has a large amount of mobility to position the camera correctly. The camera itself comes with a rear camera kit with an 18 foot cable to connect the front and back cameras, which will fit most normal-sized cars. The kit itself also comes with a plastic trimming tool to hide the wires, making the setup inconspicuous. You will have to drill two small holes into your bumper/license plate for the rear camera, so make sure you have one before installing. The kit also contains straps to attach your camera to your old mirror, which is much easier to attach and does not use adhesive so you can remove the camera at any time.

The camera has a lot of settings to optimize your footage. The contrast is adjustable to make your footage look bright and make sure details are distinguishable, the length of loop recordings is alterable, and there are other physical settings that affect things like how severe the g sensor is. If viewing the footage you are recording on the mirror is too distracting for you, you can change the view in the settings as well. There is a burst photo option to take multiple photos very quickly. While video footage is probably better to use if you need accident footage, burst photos can be helpful if you just want to take photos of your surroundings. Like most other dash cameras there is also a timestamp feature that will put the date and time on your footage and this camera also includes a license plate number option so that it is stamped on the footage too. Both of these can be turned on and off in the settings. Another cool feature you don’t see often is an anti-shake mode. If you drive on a lot of bumpy or unpaved roads, this feature will get rid of some of the motion blur you might get in the footage normally. There is some glare if you keep the brightness low, but the settings have a dynamic brightness level that is bright enough for you to see the screen even if the sun is shining directly on the camera. When the camera is off, the mirror actually does work like your original rearview mirror due to its reflective finish. While the camera has a lot of settings on the screen, it also has a power/reset button on the top of the device. The camera turns on as the car starts, but having that additional power button allows you to reset the device if it is not working the way it should. 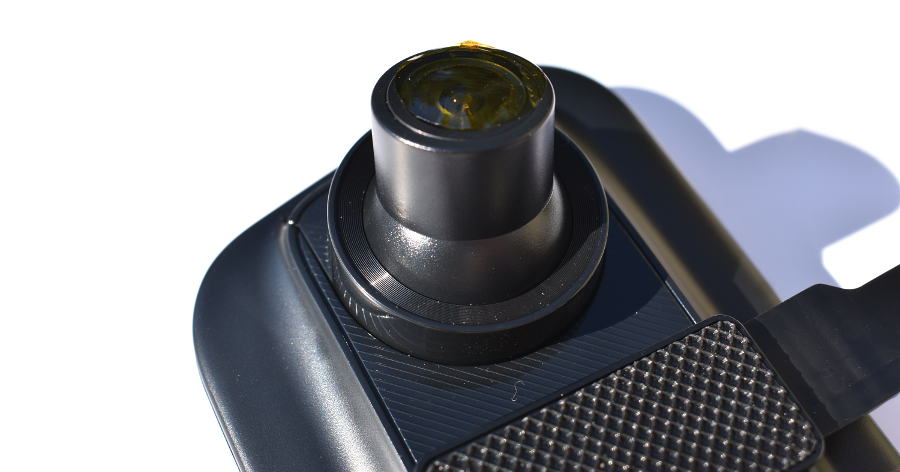 There is also a parking guard that operates when your car is turned off. It only records when it senses force on or around your car, which saves battery power and storage while recording potentially useful info if your car is vandalized or something happens around it. This is great for people who cannot see their car from their home or workplace and do not have an effective way to monitor what happens to it while you’re not around. The sensitivity of this can be changed if you’re getting too much footage or if you’re not getting enough. While most other cameras use the car’s battery for power during parking mode, this camera has a built-in battery that it uses when the car is off to save your car’s battery life. Just like any other dash camera, this one also comes with loop recording to overwrite your unimportant files while saving the important ones. One feature that is unique to this camera is that since it has a rear camera, it can give you backup assistance. If your car does not already have a backup camera, this can be incredibly helpful to make sure you’re backing up safely and can see what is going on in your blind spots, especially if you have a larger vehicle. 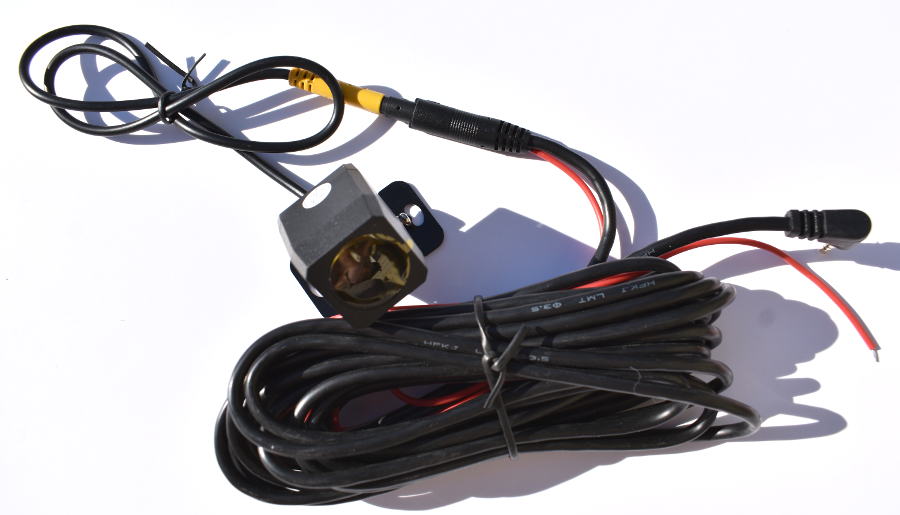 Overall, this camera performs extremely well. Although there are higher viewing options available like 4k and 2.5k on other cameras, standard HD video on this one looks great. The high contrast makes important things like license plate numbers stand out enough to be seen, and the night vision is good enough to discern important information with low lighting. It’s not the prettiest footage, but does its job well without you having to splurge on a higher resolution camera. It hasn’t really been tested a lot in extreme climates so it might not function as well in extreme heat or cold, but there are ways to mitigate this by buying a windshield visor or using a sun shade to protect the camera. The user manual recommends that you don’t use the camera if the temperature exceeds 70 degrees Celsius or 160 degrees Fahrenheit. This camera is a solid choice for a budget dash camera and can even compete with cameras at a higher price range. If you’re looking for a dual dash camera with good visuals, an easy setup, and a low price, then this is the perfect option. 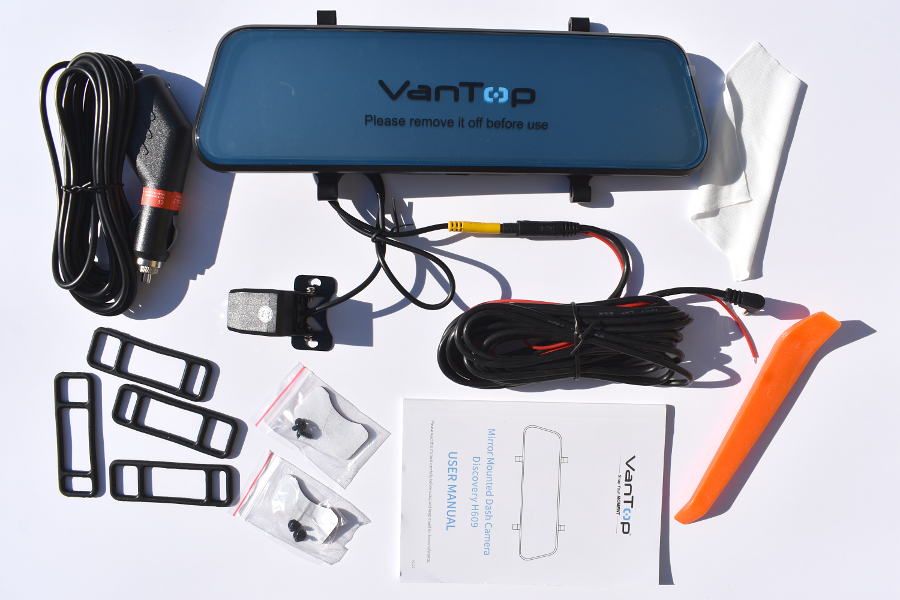 Common Questions about the Vantop H609

Do you need to remove your existing rear view mirror?

Yes, the rear camera will also record video and save it to the microSD card. Both front and rear cameras save video at the same time, on the same memory card

Does the backup camera automatically turn on when I put my car in reverse?

Yes, but you will need to wire the rear camera into your reverse light on your car for this feature to work

Can the camera record while parked?

Yes, and even though there is a built-in battery in the dash cam, you will need to buy a separate hardwire kit to properly use the parking mode feature.

Will the rear camera cord be long enough on a van or a truck?

The rear camera cable is 18 feet long. You’ll have to measure what length it will take for your car. If you need a longer cable you can contact Vantop customer support and ask to order a 23 foot cable if needed

Does this dash cam come with internal memory or a memory card?