VaVa is a new name in the industry and they’re hoping to make an impact with their affordable dash cam. Sporting a unique 360º swivel design, full HD video and a dedicated app, VaVa’s newest model packs an impressive feature set in a compact build. But with manufacturers in the East flooding the market with their own budget-beaters, can the VaVa match up to it’s competitors?

In the box you’ll find a variety of accessories. This includes a car charger and mount, a snapshot button, adhesive, a crowbar, five cable clips and the necessary wiring to get the camera working. Other necessities such as a battery, SD card ejector and literature are also included.

A noteworthy omission is an SD card itself. You’ll have to pick one up to store recordings. As with any camera, its recommended that you get a larger, more powerful card such as a Class 10 or above. This model supports microSD cards with up to 128GB of storage, so be sure to take advantage of the real estate.

As mentioned earlier, VaVa has opted for a less traditional design, with the camera mounted to a 360º swivel. This gives you the ability to freely capture footage in and around your vehicle as opposed to only what lies ahead. The polycarbonate shell is adorned in a matte black coating, helping it remain less noticeable.

The camera’s outward appearance is fairly minimal. On the front of the hockey puck shaped case is the camera lens, flanked by perforated side panels for improved air circulation. At the back is a nothing but a port, while another port lays up top, as well as the docking area for the removable mount. Down below you’ll once again find nothing bar the company’s logo, which is etched into the smooth shell. Overall, VaVa’s dash cam is compact, clean and won’t look out of place in your car.

Underneath the wide-angle lens lies a Sony STARVIS Series IMX291CMOS sensor, which aside from being a mouthful, is an impressive piece of tech for a camera at this price point. Featuring an infrared lens under 6 glass lenses, the STARVIS sensor can capture 1080p video at a smooth 60fps. Night vision comes standard thanks to the f/2.0 aperture and Sony’s own camera technology. 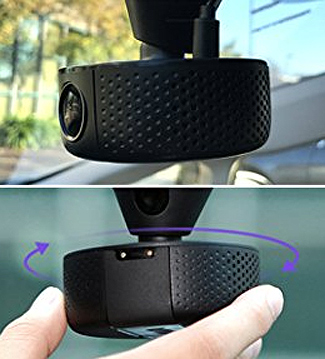 The 155º wide-angle lens is sufficient for capturing around five lanes of roadway, making it suitable for the ever expanding highways of the East where the camera is made. Its also convenient if you just want to record the view on more scenic routes. Footage is clear enough for you to be able to make out license plates at night and recordings are encoded appropriately to save on storage space. You do have the option to lower the resolution if you want to record longer trips.

VaVa’s no-gimmicks approach to the camera has paid off. The tried and tested Sony sensor paired with 1080p 60fps recording capabilities makes for a great camera. You’ll struggle to find models at this price point that can produce videos this good and offer a fully rotating 360 lens. The built-in mic also does a great job at recording audio as well and has an on/off option if you would like to mute the mic within your car.

Housed within the VaVa dash cam’s compact build is a 3-axis G-sensor. This is a helpful piece of tech to have, as it’ll automatically capture and lock footage when the camera senses a bump or movement. The rechargeable battery makes it possible for the camera to continue utilizing this feature when your car is off. This makes sense as its the most likely time for your vehicle to suffer a hit.

One of the most welcome features is the included snapshot wireless remote button. Simply stick it to your steering wheel and you’ll be able to press it to take a picture or long press for a 20 second video. This allows you to discretely and easily capture footage without having to take your hands of the wheel. You’ll have to purchase a new battery cell similar to the ones found on watches if your remote dies out, but given the basic design, it won’t happen any time soon. 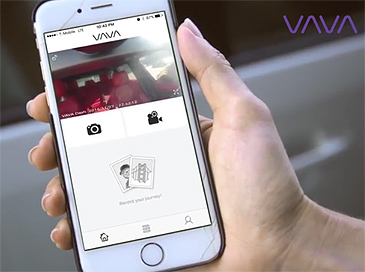 Just like any modern dash cam, VaVa has their own dedicated app to go along with it. Available on both Android and iOS devices, you can connect to the camera to your phone via WiFi or mobile data. This provides a variety of useful features, including the ability to livestream recordings. Given that the VaVa dash cam lacks a display, this is a welcome feature. You can also transfer recordings wirelessly via the app as opposed to removing the SD card.

Another useful feature is the smartphone-assisted GPS tracking, which will automatically record your location, speed and route to, as VaVa says, build your own travel journal. The app’s media gallery lets you view, edit and add filters to your photos and videos. Unlike most dash cam apps, which are generally sloppily put together simply for the sake of being a selling point, VaVa’s app features a clean and consistent design that’s easy to navigate.

As for durability, there’s no guarantee that the polycarbonate body of the VaVa dash cam will survive a significant hit considering it’ll likely be placed on your windscreen. But the camera claims to be able to sustain temperatures ranging from -4º F up to 122ºF, more than enough to last through a cold winter’s day or a sweltering summer. Footage is immediately stored on the microSD card, so you won’t have to worry about data loss, especially if the camera automatically senses the hit and immediately locks the recording.

What started out as a Kickstarter-funded project has now materialized into a fully capable and affordable car camera that delivers on its promises. A nice feature about Kickstater products is that they are often built with public impute and focus on widely requested features from the online community. The simplicity of the VaVa dash cam is admirable and it’ll likely spend most of its time untouched on your windscreen once you’ve set it up. If you want a dash cam that refrains from gimmicks and unnecessary bloat while getting the job done, the VaVa dash cam is a solid choice at this price point.