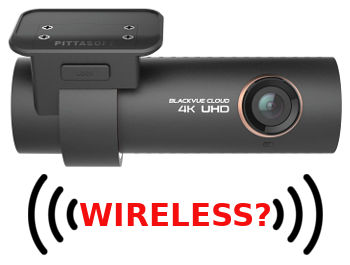 Dash cameras either have a built-in battery or capacitor and the only purpose these serve is to quickly save a video file when you shut your car off and lose power to the camera. A capacitor is only meant to have power for a very short period of time, like a number of seconds, while the batteries that are used in dash cams are very small and can typically only hold a charge for a couple minutes.

Aside from powering the dash cam, having it plugged into your cars cigarette adapter or OBD port lets the dash cam know when your car is running or shut off. This allows the dash cam to start and stop recording when you are driving, making the on/off automated, so you don’t forget to turn on the dash cam and miss recording video during a critical time, like a car accident.

Wireless dash cams are just not a practical solution for car cams, which is why you don’t see any for sale. Even if dash cams had a bigger battery life, you would still have to be constantly charging it, which would probably mean taking the dash cam off the windshield, bringing it inside your house and plugging it in, which wouldn’t be very sensible.

If by “wireless” you mean to wirelessly connecting to the dash cam using WiFi and your smartphone in order to view video and change camera settings, there are many WiFi connected dash cams out there.

When it comes to battery life and dash cams, there are many battery packs that are sold, which are usually hardwired into your cars fuse box and charge the battery when your car is running. Then, when your car is turned off, these battery packs power the dash cam while it is in parking mode, a setting that often detects motion or impact and starts recording, all while you’re away from your car.

Some people have decided to use a GoPro or action cam as their dash cam, in part for the video quality that GoPros have and to make it a wireless unit. This is considered a high maintenance approach compared to the simply set it and forget it convenience of a traditional dash cam that auto stops and starts. Some issues with using a GoPro as a dash cam are theft, because of their high value thieves will see this in your window and be tempted to break into your car. Overheating is another issue, especially in hot summer days when it is mounted on your windshield and sitting in direct sunlight. People can also forget to turn on the GoPro or action cam every time they start to drive. We have created a whole page on using a GoPro as a dash cam here.

With battery technology getting better and better as the years go by, maybe we will see a wireless type dash cam being sold, something that has the ability to wirelessly charge itself without having to be plugged into your car. As for now, you’ll just have to stick with a wired dash cam going to either your cars cigarette adapter, your ODB port or to an external battery pack.