The Z-Edge Z3D Dual Lens Dash Cam is exactly what it sounds like. This is a two-camera system that can be set up to give you a nearly perfect 360-degree view of the exterior of your vehicle. Both cameras have a wide, 150-degree angle view, so blind spots tend to be nominal and everything truly important is well covered. Of course, if you’re driving a land yacht, you are not going to have as perfect a view as someone driving a Mini Cooper, but it is still hard to beat a view like the one this setup offers. It really looks like a steal if you consider the thousands of dollars it costs to have the full-view camera set up installed in a new late model car. Here we’ll go over the basic features of this budget dual dash cam, as well ad the pros and cons.

When using the front dash cam on its own, you can record 2560x1440p at 30fps. This is great to know if the need should and you find yourself only utilizing half the package you purchased. When paired together, the set records 1920x1080p at 30fps. Unlike most dash cams, the front camera on the Z-Edge Z3D Dual Lens Dash Cam has a suction mount that includes a built-in GPS antenna. The GPS is a bit unusual and might be seen as redundant if you have a car full of other GPS enabled devices, but it is actually a pretty nifty piece of technology and later on you may be glad you got it. Meanwhile, the mount itself is sturdy and is easier to install than most suction cup mounts. 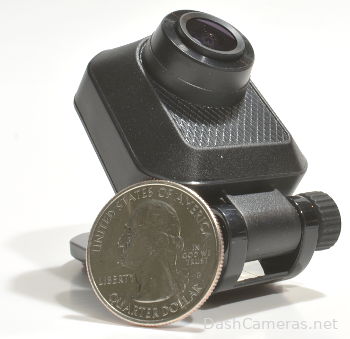 The 26-foot Micro USB cable included for the rear camera is long enough to reach the back of most vehicles. That said, it is still really annoying having a cord running from one end of the car to the other, and anyone with kids will have a hard time keeping everything plugged in and mounted in place. You will want to take the extra time to use the included cord clips to clip the cord discreetly up and out of the way, or it will drive you insane. The rear camera is mounted using 3M tape that is part of the back cameras mount. The rear camera itself is small, as you can see from the picture, with a US quarter coin placed next to it.

There is a built-in battery, but it is not intended to run the system for very long without the car being on. If you are the type that wants continuous recording, you will need to run a hard wire to the system. This is a problem that most dash cams of this type have, however, and as far as that goes this one is no harder to hard wire than any of the others.

The front-facing dashcam is 3.8x2x1.3 inches. It has a 2.7” LCD screen. This screen is large enough to make it easy to use the camera and all the features in the menu, while still seeing past it to drive. The rear camera is a lot smaller than most similar cameras—only about half as wide as the front camera—but it only needs to film, so being smaller is an asset. Properly mounted on the back windshield, you won’t even know it is there. 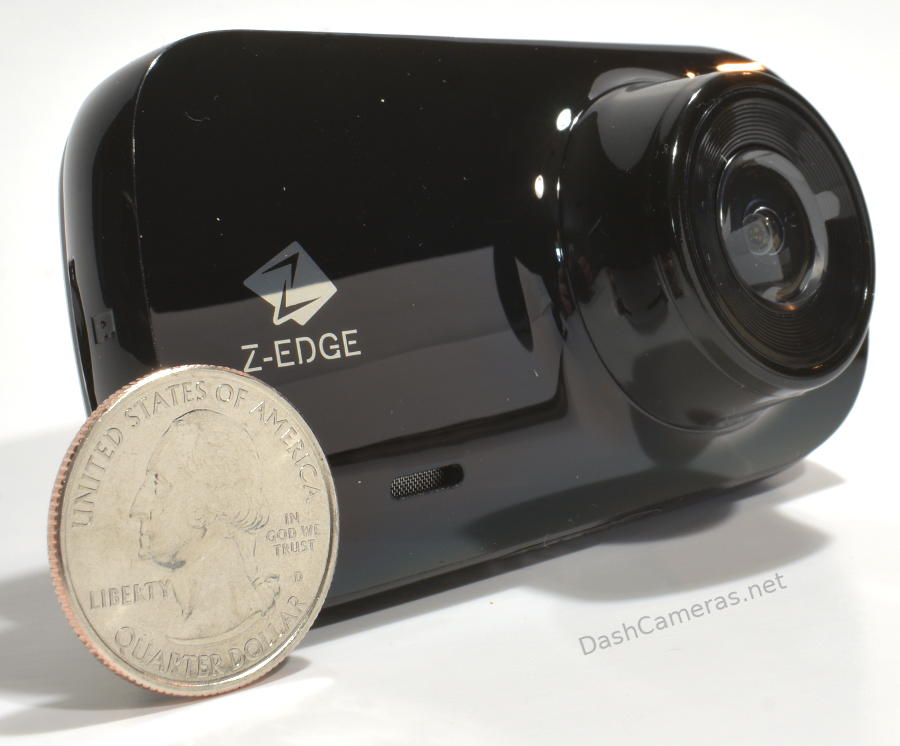 Almost. This dashcam does not have an internal storage drive like nearly all other dash cams, so you do have to supply your own SD card to use it. You could go with the cheap option, but if you are interested in an upgrade, the camera can support SD cards up to 128GB. Utilizing a 128GB card, you can get up to 720 minutes of recording time, easy.

The Z-Edge Z3D Dual Lens Dash Cam has some great features. Its night vision stacks up well compared to similarly priced dash cams. It employs Wide Dynamic Range technology, which compensates for any light or dark areas. This helps it to balance out the exposure and ensures a far clearer picture at night than you would expect from a camera in this price range. 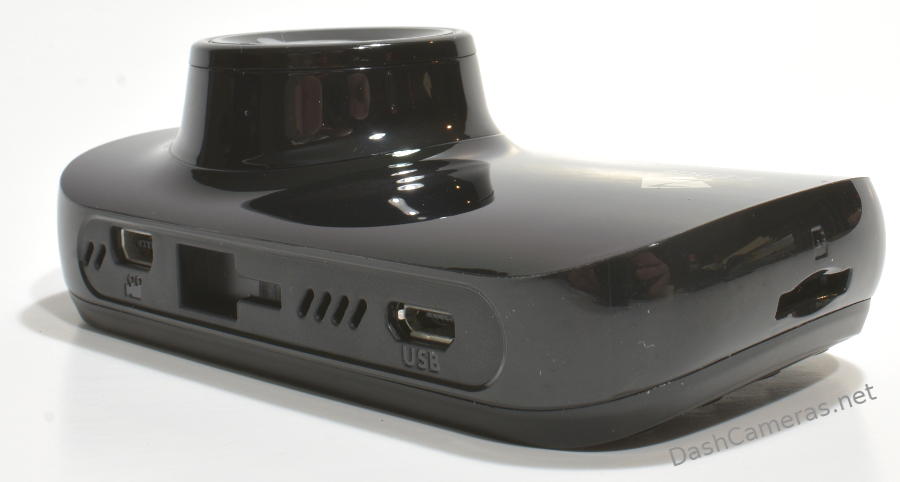 The G-Sensor does a good job sensing a collision, and it automatically protects all recent clips in an emergency file. This, of course, means that anything important is stored in its own file, while everything else is recorded in a continuous loop, with unimportant footage recorded over as space runs out.

The G-Sensor also works while the car is parked and automatically turns on the moment it senses any vibration, even if the car is off, and records everything for the next 30 seconds. That’s a great feature to have in any city where parking on the side of the road might mean coming back to a dented door or bumper. The camera automatically shuts back off, to save on battery life, after 30 seconds and will return to monitoring mode. 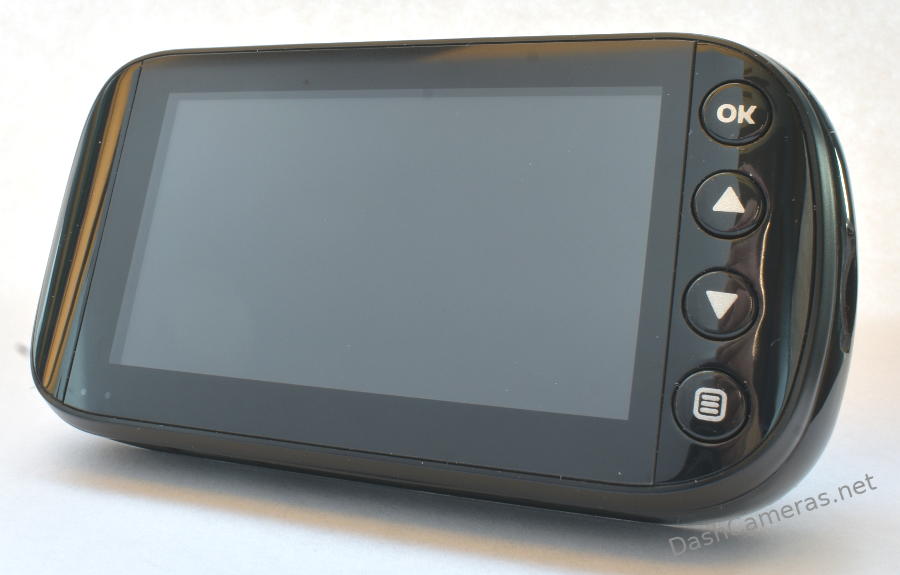 Used with the Z-Edge software, the GPS saves all your location data to a *.map file. This makes it easy to see your latitude and longitude, current driving speed as well as the highest speed you’ve hit on the trip, and even your current location on Google Maps. Just as importantly, all of this means that if anything should happen, you have a record not only of the event but where exactly it happened, how fast you were traveling—if you were moving at all—and every other detail a police officer or court could possibly want to see as proof.

What Z3D accessories are included? 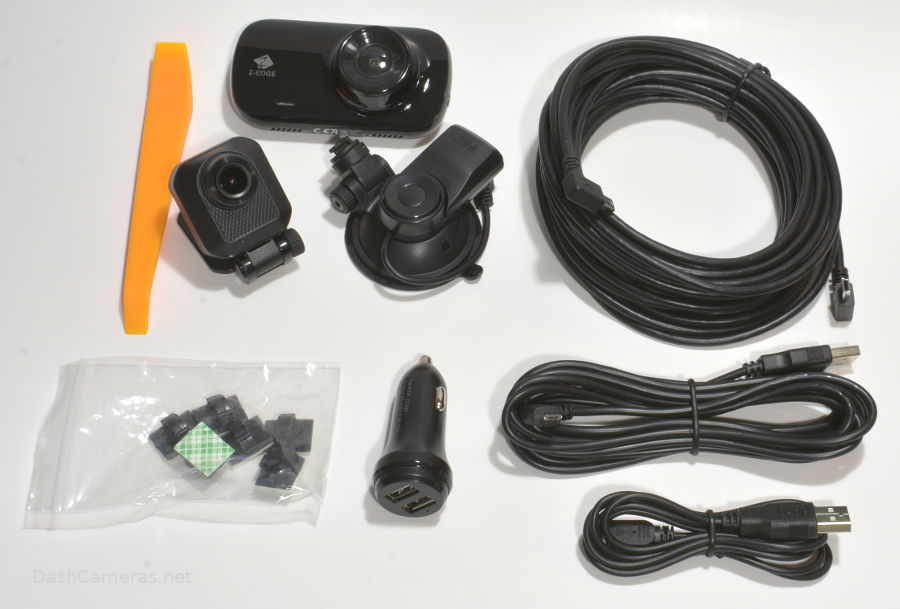